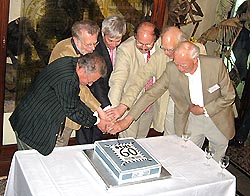 The BSHS celebrated its sixtieth anniversary in fine style with this meeting, the largest ever to be organised in the name of the Society alone. Over three full days and three nights, no less than a hundred papers, plenary addresses, special events and visits were enjoyed by over 180 attendees from across the world.

A collection of some of our favourite moments from the conference. If the embedded Youtube video above fails to display, you can open this video on a new page.

More news from the conference