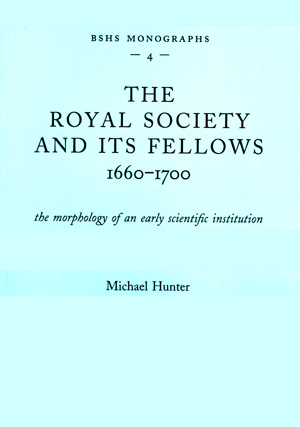 Hunter, Michael. 1994. The Royal Society and Its Fellows, 1660-1700: The Morphology of an Early Scientific Institution. 2nd edition (Chalfont St. Giles: British Society for the History of Science) 291pp.

On the second edition:

“Michael Hunter’s valuable monograph has been improved and revised in this second edition.” It “remains crucial to our accurate understanding of seventeenth-century English science.”
– Albion

On the second edition: “Michael Hunter’s well-known survey…has now matured into a second edition, with numerous updatings and some revisions.”
– Notes and Records of the Royal Society

“Hunter has produced what will surely become a standard source, a volume to be owned and consulted by anyone interested in seventeenth century science.”
– Isis

“An unrivalled collection of information about the early fellows and their activities within the Society.”
– English Historical Review