Although not an obvious tourist destination, Bushy Hill is the biggest landmark in the area of South Woodham Ferrers, Essex, and has played a notable role in the history of technology, as well as unintentionally providing natural science revelations.

From the 1950s, Bushy Hill was one of the sites used by Marconi for its radar development programme, and as a result of the prominence of this technology upon its summit, it has come to be known as “Radar Hill”. It is visible for miles around and commonly used as a navigation point for planes flying using Visual Flight Rules (VFR). Many people have therefore seen Bushy Hill, but few are aware of its interesting history. 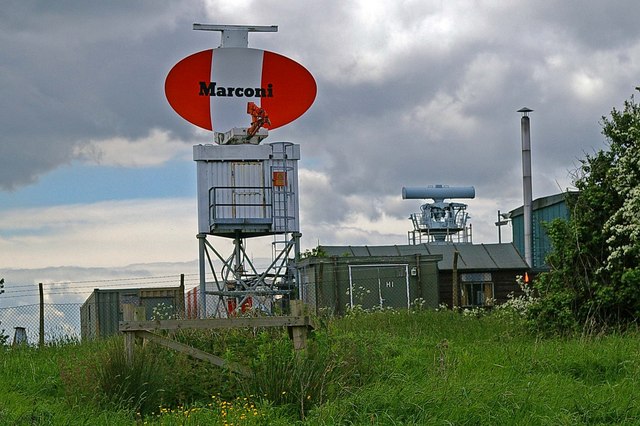 Marconi Radar (pictured in 2006). This is one of the antennas at TQ8198 : Bushey Hill Radar near South Woodham Ferrers. Only a few short years ago the idea that Marconi would cease to exist except in name would have been unthinkable. ( © Copyright Glyn Baker, CC BY-SA 2.0)

The United Kingdom’s radar system had been rapidly run down towards the end of the Second World War, but the first Soviet nuclear test in 1949 and the beginning of the Korean War in 1950 gave a new urgency to improving air defences. Marconi won significant contracts to develop radar, and acquired the Bushy Hill site in the mid-1950s in order to carry out trials on proposed new radar technology.

Bushy Hill was selected because existing sites were “rather too good”: they were located in dips and depressions that insulated radars from noise (called “clutter” in radar terminology) caused by reflections of radar signals from unwanted sources such as the ground.* However, to improve radar performance, it was necessary to find a way of reducing clutter. Bushy Hill, with unobstructed 360˚ views, and conveniently close to the Chelmsford headquarters of Marconi radar, was the perfect site. A large, 75 feet wide antenna was installed, and used to develop a range of transmitters and signal processing systems which were sold all over the world.

Bushy Hill has a Type 80 aerial mount, which had revolutionised radar in 1953. Developed under an RAF programme with the curious title GREEN GARLIC, this system dealt with both early warning and controlling interceptions. These extra seconds of advance notice acquired greater significance with the 1955 development of the Soviet H-bomb and the existence of new supersonic bomber planes. In 1959, the Marconi Company was awarded a government development contract for a passive detection system known as WINKLE, and a high speed receiving aerial was also installed. Despite the cutting edge technology, in the early days activities at Bushy Hill were restricted to daytime-only working because of complaints that the radars interfered with television reception, as both operated on Band 1 at the time.

This military-industrial site conducting work driven by Cold War concerns would also provide unexpected research legacies for a field far removed from supersonic jets and hydrogen bombs. Clutter caused by the ground had been effectively eliminated by the development of a Moving Target Indicator (MTI), but there were still small echoes appearing, moving slowly and randomly. Due to lack of explanation for these mysterious echoes, they were dubbed “Angels”. There were two possible explanations. During the early years of World War Two, large flocks of birds had been picked up on radar, and even individual large sea birds detected – the Angels could therefore be birds. However, the behaviour of these Angels wasn’t consistent with any known bird behaviour, so it was assumed that they must be pockets of warm air generated by factory chimneys or warm roofs.

Dr Sir Eric Eastwood and a small team had a great many very early mornings at Bushy, recording the flow lines which the Angels followed using a method similar to time-lapse photography. Rings which expanded outwards at dawn, like the ripples on the surface of water when a stone is thrown in, were at first assumed to be caused by the stoking of factory furnace, but an expedition to the site showed that there were not only no factories, and no buildings at all – the location of the rings was in the middle of open countryside! A copse of trees covered with starlings revealed the cause of the strange rings of Angels: successions of waves of birds, separated by three minute intervals, took off from the roost moving in expanding circles to feeding grounds. The Bushy Hill radars also confirmed the suspected “vesper” (evening) flights of swifts, and provided information on the migration of birds.

During subsequent years, Bushy Hill has been used for the development and testing of many systems, as well as being used as a showroom to demonstrate the performance of systems to potential customers. The large radar was also used as a source of radar signals to a number of users, such as the Radar Establishment at Great Malvern, the Marconi Research Centre at Great Baddow, and the RAF at Bawdsey. The RAF used this service to monitor some of its exercises. The site is still operated by BAe Systems as a trials site, so the site itself is not open to visitors, though the surrounding hills are often used for tobogganing.

Thanks to Roy W. Simons, OBE, C. Eng., FIEE, F.I.Mgt., Chris Gardiner of the Marconi Veterans Association, and the MOGS forum for their kind assistance with this article.

*One unexplained effect of clutter was that the Dutch coast appeared to be travelling slowly towards the UK!

Jack Gough, Watching the Skies: The History of Ground Radar in the Air Defence of the United Kingdom (HMSO, 1993)