In 2006, the Outreach and Education Committee’s web essay competition that challenged contributors to produce a 500-word piece, aimed at a general audience, in answer to the question: Why should anyone need to know about the history of science? Below, Michal Meyer’s winning answer to the question.

Why should anyone need to know about the history of science? 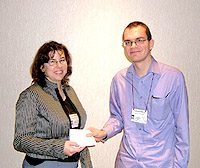 The world we take for granted is built on science. Both the material products of civilization — electricity, atom bombs, cars, computers, the decoded human genome — and the way we think about the world and ourselves lie on foundations laid by science. We are homo scientificus, the makers and the made of this world of science.

It wasn’t always so. How did we get this way? And who and what made us this way? Just as that illustration in biology textbooks showing our hairy hunched-over ancestors gradually straightening, striding out and suffering hair loss gives us a sense of our biological origins, history of science gives us the origins of our ideas and understandings of the natural world. And it does more: it tells us how these ideas changed the way we view the world and allowed us to change the world and ourselves.

Our ever-changing understanding of nature has always interacted with and affected the nature of our society. A machine philosophy helped generate the industrial revolution; the middle class that rose on the back of that revolution created our modern consumer society. The needs of an empire to communicate with itself advanced our understanding of electricity and its manipulation, and built the world-wide web of telegraph cables that knitted the British Empire together in the nineteenth century. Our understanding of the physical microworld combined with the urgencies of war created the atomic bomb of the twentieth century, which in turn led to the new politics of the Cold War.

But as science remade the world around it, it also remade us. The very idea of progress is tightly entwined with the origins of modern science in the seventeenth century. When we talk of controlling the environment — when we build huge dams or create an agricultural revolution to feed the planet’s growing population — we draw on ideas developed during that time, for better and for worse. In the nineteenth century, with Darwin’s theory of evolution, science reshaped the very concept of what it means to be human. That shaping continues to this day.

Today, we often think of science as the final arbiter of what is true and what is false, and as the epitome of reason. The history of science puts science back in the messy contingent world of human beings and their desires and limitations. Choices made and decisions taken in the past make up our present. Understanding the how and why of our scientific world, and the effort — both scientific and non-scientific — it took to fashion that world, offers the best hope of understanding the issues facing us. Issues from global warming to space exploration; from the very nature of progress to what it means to be human.

About the 2006 Essay Competition

The Outreach and Education Committee’s web essay competition, announced in May 2006, challenged contributors to produce a 500-word piece, aimed at a general audience, in answer to the question: Why should anyone need to know about the history of science?

The competition generated interest in the UK and across the world, drawing more entries than the Society’s other essay competitions, from a far wider constituency. Watching the email announcements get posted from list to list and carried across the world was exciting.

We received 54 applications for entry numbers and 32 entries were submitted by the closing date of 31st August. 17 came from within the UK, seven from other European countries (including Belgium, Germany, Ireland, Italy, and Ukraine), 11 came from the USA, two from Canada, two from Australia and three from India. We also had entries from Brazil, the Philippines, and Singapore, with eight entrants declining to supply a postal address.

Every essay was read by two members of the Outreach and Education Committee, and the best eight went through to a second round to be read by all six judges. We were unanimous in our decisions about which three made the final round. The winning essay was submitted by Michal Meyer from Gainsville, Florida. The runner up was Daniel Mitchell from Oxford. The judges wish also to give special commendation to Mark Hurn from Cambridge, for a very amusing entry.

Although we encouraged people to include images with their submissions, few did so: next year, we will be running a similar competition for sets of images. Details will be announced in May 2007.