In the final post in our series about BSHS Engagement Fellowships, we hear about a project at the Polar Museum, at the Scott Polar Research Institute in Cambridge. Ed Armston-Sheret, PhD student at Royal Holloway, University of London, and Charlotte Connelly, curator at the Polar Museum describe how Ed’s research will provide visitors to the Museum with a long view on the relationship between climate change research and polar science.

Over the last three years the BSHS has run Engagement Fellowships. These Fellowships are opportunities for postgraduate students to collaborate with museums, archives and other heritage organisations. The collaborations generate new engagement activities, exhibition content or resources that are based on emerging scholarship in History of Science. The BSHS will be advertising for Expressions of Interest from heritage organisations to act as future Fellowship hosts in November this year. For more information contact Elizabeth Haines at [email protected]

by Ed Armston-Sheret and Charlotte Connolly

Why does polar science matter? And how has research in the polar regions contributed to our understanding of climate change? These are some of the questions that my BSHS Engagement Fellowship at the Polar Museum addressed.

I spent my time at the museum updating one of the displays on climate science and developing new content for some touchscreen displays within it. The project involved finding objects, images, and stories which show the history of polar climate science and highlight the importance of climate change.

One of the most exiting aspects of the project was the opportunity to be creative. Spending time thinking about the most important stories to tell and the best way to tell them was enjoyable. It was particularly amazing looking through the museum’s collection of scientific instruments and learning about the stories behind them.  My favourite object was a beautiful barometer from the Terra Nova, the ship that took Captain Scott to Antarctica on his final expedition. 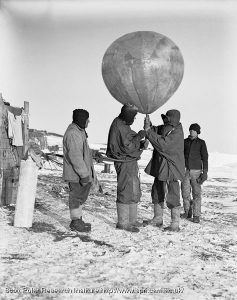 The new displays and touchscreen content cover a broad array of polar science: from how the meteorological records kept by whalers are useful to modern scientists, to more recent expeditions to Antarctica to find out the cause of the ozone hole. Alongside these stories, the new displays will address how climate change threatens polar heritage itself, including the huts where polar explorers carried out much of their research. 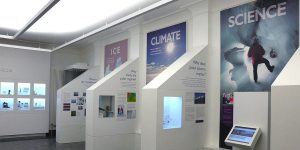 For me, the main challenge of the project was trying to condense complex theories or histories into small, three-sentence captions. However, I also found this challenge a great learning opportunity: the small amount of space forces you to focus on the main points and why they’re important. This skill is definitely something I’m going to hold on to and take into my academic writing and presentation.

The feedback and support I received from the museum’s curator were particularly important to my learning during the fellowship. Getting detailed feedback from an experienced curator was an amazing opportunity, and I’ve learned a lot from it. The welcoming and supportive attitude of the rest of the team also ensured that my time at the museum was a positive and enjoyable one.

Overall, the BSHS Engagement Fellowship has allowed me to both learn a variety of new skills and to get involved in an exciting and important project.

Ed’s work has contributed to a re-development of some touch screens in the Polar Museum which discuss science and climate in the polar regions. Thanks to Ed’s input, the contemporary science in the screens will now have a longer historical context, showing the developments and challenges that polar researchers have faced over time. It’s been brilliant working alongside Ed, who has brought new perspectives and challenged us to think about our stories in interesting new ways. We’re still working with the touch screen developers to get his hard work out into the museum, but hopefully it’ll be there for visitors from early in 2019.