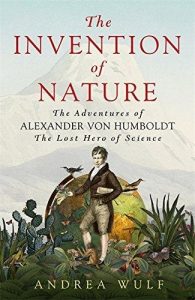 The BSHS is delighted to announce that the 2017 Dingle Prize, for the best book in history of science, technology and medicine accessible to a popular audience, is awarded to Andrea Wulf for her remarkable book The Invention of Nature: the Adventures of Alexander von Humboldt, the Lost Hero of Science. London: John Murray, 2015. The judging was chaired by Jim Secord and the four other members of the panel were Matthew Eddy, Anne Hanley, Martin Rudwick and Sophie Waring.

The judges commented that: “historians of science have long recognized the naturalist and traveller Alexander von Humboldt as a pivotal figure in the history of science, but for too long he has been undervalued in the English-speaking world.  This beautifully written biography effectively conveys his significance to a wide audience, in an animated and adventurous narrative that echoes the liveliness of Humboldt’s own writings.  The award of the Dingle Prize particularly recognizes Andrea Wulf’s mastery of the vast range of history of science scholarship on Humboldt and her command of original sources in multiple languages.  Timely and significant—particularly given current attacks on climate change science – this is scientific biography at its best. The judging committee appreciated the range and quality of this year’s submissions, and made its final selection from a diverse shortlist of seven books representing the requisite qualities of accessibility and scholarship.”

The other shortlisted titles were:

Gordon Corera, Intercept: The Secret History of Computers and Spies, Weidenfeld and Nicholson

Michael D. Gordin, Scientific Babel: How Science was Done Before and After Global English, University of Chicago Press

Ulinka Rublack, The Astronomer and the Witch: Johannes Kepler’s Fight for his Mother, Oxford University Press

About the Author: OEC Chair