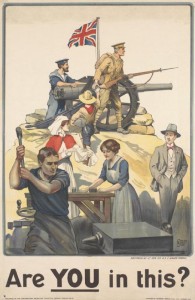 Patriotism and Profit during World War One

Supported by the AHRC-funded project:
Innovating in Combat: telecommunications and intellectual property in the First World War

University of Leeds and Museum of the History of Science, Oxford

Delivered by Graeme Gooday and Elizabeth Bruton, University of Leeds

This lecture explores the different motivations of individuals, the military, industry, and commerce in relation to World War One telecommunication innovations – were they motivated by patriotism, profit, or both?

Wartime developments in telecommunications were especially reliant on pre-war commercial development and innovation. But what motivated commercial companies such as the Marconi Company and others to assist with wartime military demands for telecommunication? Was it, as was often claimed during and after the war, patriotism or did the pursuit of profit and expectation of post-war reward also motivate their contributions to Britain’s wartime efforts?

Based on material from BT archives and IET archives, we will explore the roles of individuals, members’ institutions, state bodies, the military, and commercial bodies in the development of telecommunications during World War One. We will also draw out a strong degree of tension between military demands, civilian innovations, and commercial profit. We will uncover voices left out from the traditional narrative of wartime patriotism and explore how wartime activities influenced post-war developments, successes, and technologies.

Light refreshments will be provided before and after the lecture. The lecture will be followed by a discussion which will last about an hour in total.

The Fellows’ Room can be accessed via the Director’s Entrance which is separate to the main Science Museum entrance and is located at the Imperial College end of the Science Museum building. The entrance will be clearly marked.

Directions to the Science Museum are available at http://www.sciencemuseum.org.uk/visitmuseum/getting_here.aspx

For any questions about the lecture, please email Elizabeth Bruton at [email protected].

About the project: Innovating in Combat is a one-year collaborative project between University of Leeds and the Museum of the History of Science, Oxford and is funded by the Arts and Humanities Research Council. Other partners include BT archives, IET archives, Porthcurno Telegraph Museum, Science Museum, and University of Leeds HSTM Museum.

Further details about the project and partners can be found on our project website: http://blogs.mhs.ox.ac.uk/innovatingincombat/