BSHS Monograph 9 – In the Shadow of Lavoisier 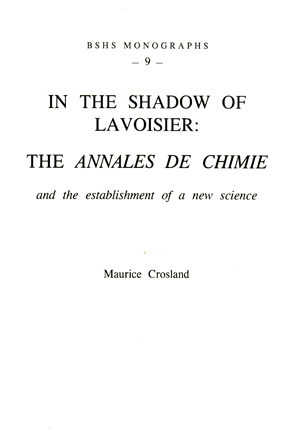 In the Shadow of Lavoisier

Crosland, Maurice. 1994. In the Shadow of Lavoisier: The ‘Annales de Chimie’ and the Establishment of a New Science. (Oxford: British Society for the History of Science), 354pp, 6 illustrations.

“This biography of one of the most influential scientific journals in the nineteenth century welcomes the reader with a wealth of information and insights on French science, as one might expect given Maurice Crosland’s long-standing engagement with France. It complements and completes his earlier works on Gay-Lussac, the Society of Arcueil, and the French Academy of Sciences by offering a sketch of the landscape of French science. Despite the title, the book covers much more than the Annales; it is very much like a collective biography of French scientific literature and will serve as an invaluable guide for students of the history of French chemistry. It will certainly help them to possess beforehand a comparative overview of the textbook and journal literature of the period, as well as the knowledge that the Journal de Physique functioned largely as an oppositional journal to the Annales.”
– Isis