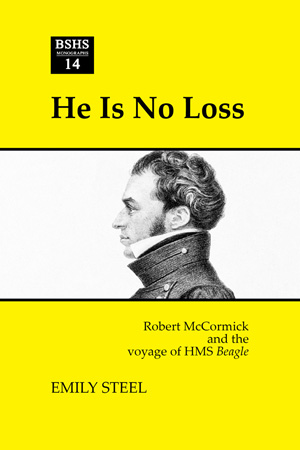 He Is No Loss

Steel, Emily. 2011. He is no loss: Robert McCormick and the voyage of HMS Beagle (London: British Society for the History of Science), 74 pages.

Who was the naturalist on HMS Beagle?

Robert McCormick (1800-1890) was ship’s surgeon and naturalist for the first four months of the second voyage of HMS Beagle, 1831-1836. In April 1832 he left the ship. McCormick was furious that, for all intents and purposes, a civilian passenger on board had usurped his rightful position as ship’s naturalist and confidant to the captain. That passenger, of course, was Charles Darwin.

This volume examines McCormick’s activities on HMS Beagle, his participation in the natural history of the voyage, and his relationships with both Darwin and FitzRoy. McCormick’s grudge stewed. Of his many exploits, service on the Beagle was all but omitted from his autobiographical writing. At the heart of this monograph is a conundrum: why did McCormick write himself out of, arguably, one of the most celebrated expeditions of the nineteenth century?

This study of McCormick is accompanied by previously untapped source material related to the Beagle voyage. The volume provides a transcription of McCormick’s Beagle journal from the time he arrived onboard in the summer of 1831 (while the ship was in harbour at Plymouth), through his departure from the ship at Rio de Janeiro in April 1832, and during his return voyage to England later that same year. This diary has not been published previously.McCormick’s activities on HMS Beagle are fascinating in comparison with Darwin’s notes, diary and later publications. They nicely illustrate an approach to natural history alternative to Darwin’s, and they offer a case study of excision’s impact on historical memory.