On first entering Bar Italia, one is confronted by the overt Italian-ness of the café. From Italian flags to football memorabilia, one can see that the aptly named ‘Bar Italia’ sits easily alongside its peers in Frith Street, Soho, with patrons viewing it as a comfortable, family-run establishment. 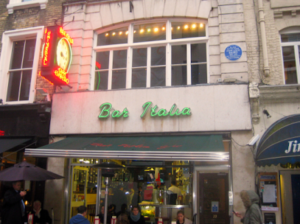 An extract from a restaurant critic captures the essence of the bar in two sentences:

One of the bar’s dominant features is the giant television at the far end. Italians are well known for their fanatical love of football and this TV screens all the important matches.

For many patrons, the ‘giant television at the far end’, as well as the nationalistic fervour that surrounds the football supporters who frequent the bar, inculcates its personality. There is a unique poetry in that while this modern flat screen serves to define the bar today, it lays feet from where the technology which inspired it was itself developed and demonstrated by John Logie Baird in 1926.

Indeed, the role of 22 Frith Street in the development of television is as unquestioned as it is often unrealised by its patrons. The bar itself is equidistant between Leicester Square and Tottenham Court Road. It first opened as a restaurant and coffee bar in 1949, under the Polledri family; who have been there since, for three generations.

Nearly a quarter of a century before the Polledri family, in 1926, for a short period of time, No. 22 was the laboratory for the pioneer of television, John Logie Baird. Moving to this building shortly after a disagreement with his previous landlord in Hastings, Baird, low on capital and using primitive equipment, demonstrated to the world, through members of the Royal Institution, the power and potential of television.

For many years, Baird had been branded as a ‘lunatic’ by his contemporaries and the Press for trying to achieve the impossible in broadcasting television.

Indeed so low-key was this event on 27 January 1926, with such low expectations of success, that only The Times was present from the Press.

Yet, despite this relatively inauspicious reception, The Times article the following day, on the ‘Televisor’ burst the dam, with dozens of men arriving at Frith Street, desperate to witness the first images of people transmitted by television. This cascade of interest continued, with the BBC (British Broadcasting Corporation) working with Baird to broadcast images wirelessly between their headquarters and his laboratory soon after this initial demonstration.

The public and private shift towards Baird during this period led to him and his team vacating Frith Street in February 1926 to move to larger premises, at Motograph House, near Leicester Square. For a few short weeks, Frith Street had been at the centre of this new media world, laying the foundation for the medium that so many of us take for granted today.

With Baird’s death in 1946, came a larger recognition of his work, and, in 1951, he received official recognition from the London County Council, when a blue memorial plaque was unveiled over the premises, proclaiming:

The bar itself offers no real mementos to Baird, aside from the blue plaque, with a much larger focus on Italian culture, nationality and football, evidenced both at the bar and through the website, which has little mention of Baird, or his demonstration of human transmission through television, or his other invention of Noctovision (television broadcast by infra-red rays).

As a post-modernist historian, the notion of Baird striving on his own to demonstrate television sits awkwardly with my profoundly anti-Whig intention. Sydney Moseley (a contemporary of Baird), speaks candidly in his book John Baird: The Romance And Tragedy Of The Pioneer Of Television about how Baird himself felt uncomfortable with the title of the ‘Father of Television’ and Moseley and contemporaries sought to rectify any Whiggish misattribution.

This shift in understanding can be understood with Moseley’s closing paragraph on the work of Baird:

Inventions are the outcome of long and painstaking research into that compendium of experimental knowledge to which thousands of other workers have contributed their mite. Thus even John Logie Baird cannot be said to have ‘invented’ television. But he was the first man to take it out the laboratory stage.

This assertion (tacit by 1950s standards), for me, increases the special nature of the modern Bar Italia, with the lack of overt celebration aligning with Baird’s sensibilities and sense of self and place; not as the inventor of television, but as the pioneer of its wider use in a real setting.

On visiting Bar Italia you can catch a sight of the famous building with its blue plaque, obscured by the huge amount of Italian memorabilia, with the main focus being on the football viewed through its cinematic television set. Whilst this does little to give you a sense of the scientific achievement realised within its walls long ago, this subtle nod to the past serves only to strengthen the post-modern deconstruction of the Whig History of Science. It allows one to glance, however fleetingly, at those who also worked on developing television from a ‘lunatic’s’ gambit, to one of the largest media forms in existence.

So next time you are in and around the Soho area, raise a glass and a smile towards 22 Frith Street, and admire the inconspicuous nature of the building and the fundamental yet inconspicuous role it played in shaping our modern era.

Sydney Moseley, John Baird: The Romance and Tragedy of the Pioneer of Television, Odhams Press Limited, (1952).

Tom Ritchie is an Associate Lecturer and Ph.D. student in History of Science at the University of Kent. He has special interests in the history of technology and how models are made and used; in the museum context and put on display; and in science communication.

About the Author: Alison Moulds