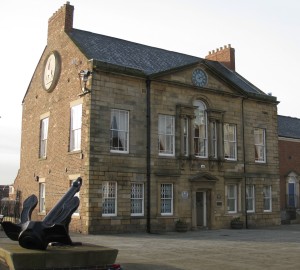 At the bottom of Howard Street, North Shields, sits a building that has changed its purpose and transformed its significance in line with the surrounding area and its inhabitants. North Shields, a one-time thriving shipping community at the mouth of the River Tyne, now has precious few reminders of its important past as one of Britain’s leading maritime ports, along with the likes of London, Liverpool, Glasgow and Cardiff. This building, also known as Maritime Chambers, is one of these reminders. 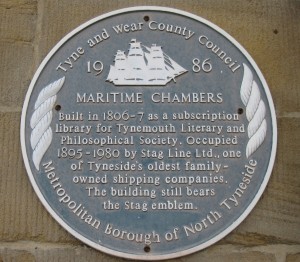 Plaque on the side of 1 Howard Street, North Shields

1 Howard Street was first designed in 1806 as the subscription library (the first in the North of England) for the Tynemouth Literary and Philosophical Society. It served in this important capacity until it was bought by local shipowners the Robinson family in 1891, who used it as their company headquarters for ninety years until October 1981. After a brief period as a pub/restaurant (in the basement) the building changed purpose again and is currently being used as a Registrar’s Office, with marriages being conducted in the old shipping directors’ offices.

It has been estimated that there were at least 90 Tyneside shipping companies that have ever owned tramp ships. The Robinson family of North Shields owned and ran one such company, helping it to become one of the most respected and locally renowned tramp shipping companies throughout most of the nineteenth and twentieth centuries (a tramp ship is generally defined as a cargo vessel following no set routes, picking up trade when and where it can).

The first vessel purchased under the name of Robinson was the sailing ship Blessing, bought in 1817 by Captain James Robinson (1768-1833), a master mariner originally from Whitby. This vessel stayed in the family until it was wrecked in 1845. Using the insurance money from Blessing, Captain Joseph Robinson (1816-1889), son of James, ordered and bought a new sailing vessel Stag, which was delivered on 14 May 1846. ‘Joseph Robinson & Company’ was formed by Captain Joseph in 1850 to manage the interests of Stag and other sailing vessels. In 1871 the Robinson’s had their first steamship built, the S.S. Stephanotis, and the company quickly built up a fleet of steamers, operating between 10 and 20 vessels from the 1870s to the outbreak of the First World War in 1914.

From 1870 onwards, the company was managed by Captain Joseph and two of his sons; Joseph Robinson Jr (1846-1904), and Nicholas J. Robinson (1847-1902). The name changed to ‘Joseph Robinson & Sons’ in 1883 before eventually becoming ‘Stag Line’ Ltd in 1895. These three men oversaw the running of the company, helping to transform it from a small-scale, local endeavour into one of the most efficient, successful, and respected North Shields tramp ship companies in the nineteenth century. 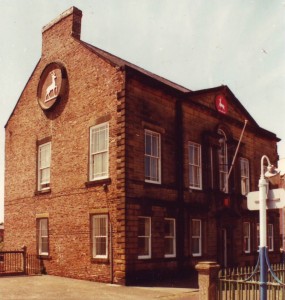 The image of the trippant stag, bringing up notions of nobility and grandeur, was adopted on the funnel of every ship, on the top of all company correspondence, on the front and side of the company’s office building and even etched into the windows of this building. This symbolism was a prominent part of the company’s identity when ideas of imagery or branding were as important commercially then as they are now (think Google, or Apple). The positioning of the building overlooking the Tyne at the end of Howard Street meant that not only could Stag Line’s owners oversee theirs and others’ ships entering or leaving the river, but also every ship passing through would see the large and prominent image of the white stag on a bright red background (unfortunately, when a council contractor was recently restoring the concrete around the sign he left the background unpainted and coloured the stag in red!). 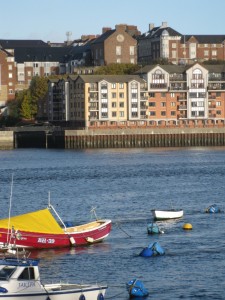 In summary, this building serves as a physical reminder of a by-gone age, where entrepreneurial Britons helped their families, communities and the maritime nation of Britain itself to prosper and thrive. In an age where Britain, with its sprawling empire and global shipping networks, was at the forefront of world industry and trade, it was in buildings like 1 Howard Street and in families like the Robinsons who operated in them, where all this ‘progress’ and ‘success’ was made. Without families like these, who helped shape their local society (and who were in turn shaped by them), maritime Britain and its associated buildings and industries may not have been the dominating, seemingly unsurpassable force it once was.