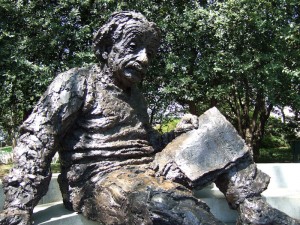 The Albert Einstein Memorial, located just off the National Mall in Washington, D.C. near the corner of 21st Street northwest and Constitution Avenue, is the official monument to Einstein in the United States. Free to the public, it is situated in a shady grove of trees in front of the headquarters of the National Academy of Sciences (NAS) . Einstein was elected a foreign associate of the NAS in 1922 and a full member in 1942.

The Einstein Memorial features a 12 foot bronze statue of Einstein that weighs about 4 tonnes. The sculptor, Robert Berks (1922- ), modeled it after a bust he had made from a portrait sitting with Einstein in 1953. Consequently, it portrays the founder of relativity in his final years.

Einstein is depicted sitting on a three-step granite bench reading a paper with a set of equations. These equations summarize the results of three of Einstein’s most important contributions to physics: the photoelectric effect, the general theory of relativity and the famous relationship between energy and mass. 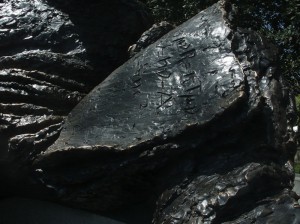 Engraved in the bench are three different quotations attributed to Einstein:

As long as I have any choice in the matter, I shall live only in a country where civil liberty, tolerance, and equality of all citizens before the law prevail.

The right to search for truth implies also a duty; one must not conceal any part of what one has recognized to be true.

At the base of the statue is a granite field speckled with over 2700 metal studs. These represent the position of the celestial objects in the sky at the time the memorial was dedicated, as ascertained by astronomers at the US Naval Observatory. The unveiling took place on April 22, 1979, during a meeting of the NAS that honoured Einstein’s centennial year.

The stately NAS building, just a few steps from the Memorial, stands as an emblem of the dedication of astrophysicist George Ellery Hale (1868-1938) to construct suitably elegant quarters for the esteemed organisation. A pioneer in the field of solar spectroscopy, inventor of the spectrohelioscope and founder of Mt. Wilson Observatory, Hale was elected to the NAS in 1902. Almost immediately, he set out to reform the organisation and transform it into an active force for the promotion of science. An 1863 act of the U.S. Congress had established the NAS as an honorific society but didn’t provide it with dedicated quarters. Hale pushed for the founding of an arm of the NAS, called the National Research Council (NRC), to enable scientists to help guide government policy. With the establishment of the NRC in 1916, Hale argued that the NAS required a proper headquarters. He personally sought out noted architect Bertram Grosvenor Goodhue, led a fundraising campaign for the building, oversaw its design and even contributed the motto inscribed in the dome of its Great Hall. Hale wrote:

To science, pilot of industry, conqueror of disease, multiplier of the harvest, explorer of the universe, revealer of nature’s laws, eternal guide to truth.

Parts of this description are excerpted from my article “Washington: A DC Circuit Tour.”