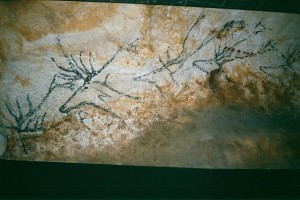 Altamira Cave, about 1.3 miles (2 km) from the Cantabrian village of Santillana del Mar, lies in tranquil, rolling country, quite different from the cave art area in the Dordogne, where the caves are set in steep limestone cliffs. The paintings in the cave date from about 15,000 to 12,000 B.C. The spectacular ceiling frescoes show remarkably realistic full-color representations of bison in various poses (asleep, running, and so forth), wild boar, primitive horses, and reindeer. They provide excellent examples of the three-dimensional effect achieved by taking advantage of undulations in the rock surface. Access to the cave is through a visitor center and, unfortunately, conservation measures require that only a handful of people can be admitted each day, the precise number depending on outside humidity and temperature. Even with this restriction there are signs of some surface deterioration, so that, to be realistic, one must be prepared for the possibility that the cave may some day be closed to the public altogether. At the present time appointments for viewing must be made in writing at least six months in advance. Coming without reservation one can camp on the doorstep, hoping that some visitors with permission will not show up, in which case one may be admitted if the guards are in a charitable mood.

If one succeeds in getting in, then the caves will be found to be an unforgettable sight, a humbling experience in a way for those who vaguely think of artistic creation as something that began in Italy in the Renaissance. The Altamira caves are more spacious than the caves built into the cliffs in the Dordogne area in France and the size of each viewing group is limited to only five people, which makes for a more relaxed visit and greater opportunity to examine the pictures in detail.

For those who fail to be admitted, there is a museum and a videotaped film. The latter is badly produced and cannot be recommended as a substitute for the real thing. We  recommend instead the realistic reproduction of the Altamira ceiling which can be seen at the Le Thot Center of Prehistory in the Dordogne, as part of a visit to the cave art in that area. There is also a reproduction of the Altamira ceiling in the Museo Arqueologico Nacional in Madrid-we have not seen it and therefore cannot comment on it.

It should be noted that Santillana del Mar itself is an extraordinary little place, well worth a visit. It has cobbled streets, old village houses still shared by the owners with their livestock, churches, fountains, and so on, all astonishingly well preserved from Santillana’s fifteenth-century heyday.

Following in the footsteps of James Smithson