By Charles B. Greifenstein 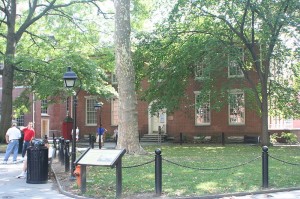 The full official name of the Society is the American Philosophical Society, Held at Philadelphia for Promoting Useful Knowledge. The name dates to 1769, when two scientific societies merged, but the APS traces its origins to 1743, when Benjamin Franklin and others formed the organization to provide a way for its members to get together to discuss “philosophical” matters. For Franklin, “philosophical” meant natural philosophy, the study of the natural world, science, and practical knowledge.

The APS is still a membership organization, with about 1,000 elected members accomplished in a broad range of fields, from science to civic and cultural affairs to social sciences and the humanities. It is the first learned society in the United States and meets semi-annually in interdisciplinary, intellectual fellowship. The APS also has a number of core programs. Research grants support a wide range of activities, including one of the oldest grant funds for ethnographic and linguistic field work. The Publications Department publishes monographs and journals, including the oldest learned journal in the country. The Museum, whose antecedent is Charles Willson Peale’s museum of the eighteenth century, puts on exhibits that reflect the interests of the Society and its collections.

While it is an organization separate from the APS, the Philadelphia Area Center for the History of Science (PACHS), which offers fellowships, colloquia, and a federated on-line search tools, has its offices in one of the APS’ buildings.

The Museum has a changing program of temporary exhibitions, on interrelated themes of science, art and history; many – in fact most – of them are of direct interest to historians of science. See http://www.apsmuseum.org/. The Museum is located in Philosophical Hall, right next to Independence Hall, which is itself across the street from the Liberty Bell. You can visit the Liberty Bell for free any time it is open (the APS Museum, too, though donations are welcome), but you need timed tickets to see Independence Hall; tickets are free and available at the Visitors Center.

The Library has exhibits in its foyer, which is open to the public weekdays. During the summer tourist season there is an exhibit of treasures of the APS. Almost always on display is one of the original journals of Lewis and Clark, most of which were deposited in the Library by Thomas Jefferson in 1817. 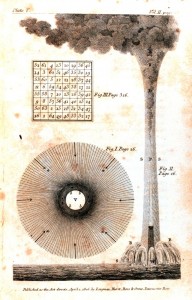 Library Hall, located across the street from Philosophical Hall, is home to one of the great independent research libraries in the country. Using the Library requires registration and making an appointment (see http://www.amphilsoc.org/library/research), but should you have an interest in one of the library’s collection strengths, there are rich holdings to explore. The three main collection areas are American history before 1860 (including the papers of Benjamin Franklin and Charles Willson Peale and his family), Native American ethnography and linguistics (including the papers of Franz Boas), and, of course, the history of science.

Early natural history is represented in such collections as the Benjamin Smith Barton Papers, the papers of John LeConte, and the journals of André Michaux. The papers of ornithologist Robert Cushman Murphy are in the collection. Many other disciplines are represented: evolutionary biology (Charles Darwin, George Gaylord Simpson), physics (Edward U. Condon, John Wheeler); biochemistry (Carl Neuberg, Erwin Chargaff), computer science (John W. Tukey), bacteriology (Salvador Luria), neuroscience (Warren McCulloch), microbiology (Herbert Jennings), pathology (Peyton Rous, Simon Flexner), plant genetics (Barbara McClintock). Indeed, the genetics collection is among the best in the world and includes the papers of Theodosius Dobzhansky, L. C. Dunn, Sewall Wright, P. M. Sheppard and Curt Stern, to name a only a few. In addition, the APS is one of the largest repositories of eugenics collections in the world, holding records of such organizations as the Eugenics Records Office and the American Eugenics Society as well as the papers of Charles Davenport.

The Library also has a large collection of printed material, including some 275,000 bound volumes, thousands of maps, and tens of thousands of prints and photographs. Among the special printed collections are the Richard Gimbel Thomas Paine Collection, the Samuel Vaughan Collection (a rare, intact late 18th-early 19th century private library), and the James Valentine Charles Darwin Collection, containing works by Darwin in 25 languages.

Complete information about the American Philosophical Society can be found on its website, www.amphilsoc.org.