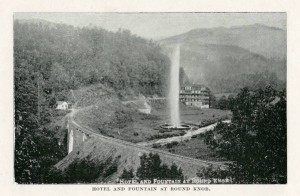 From Souvenir of Asheville or the Sky-Land, undated, D.H. Ramsey Library, UNC Asheville.

Andrews Geyser is a man-made fountain near Old Fort, NC.  The fountain is named for Colonel Alexander Boyd Andrews, a North Carolina native who was the Vice President of the Southern Railway Company and one of the men responsible for the construction of the railroad between Old Fort and Asheville, North Carolina, in the late 19th century.  Originally constructed in 1885 as a feature of the Round Knob Hotel and as a tribute to the men who died constructing this stretch of railroad, the fountain has had a checkered history.  In 1903, the hotel burned to the ground and the fountain fell into disrepair.  In 1911, the fountain was moved to its current position and restored.  It was at this time that Old Fort was given rights to the fountain, including the basin and pipe that supplies it.  Also, it was at this time that the fountain was officially named Andrews Geyser.  Again in the 1970s, the fountain underwent restoration and was rededicated on May 6, 1976. Today, the area around Andrews Geyser is a public park containing several large stone benches and a picnic area. It also has access to Mill Creek and a view of passing trains. 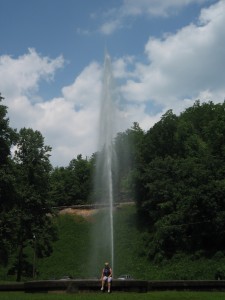 Andrews Geyser during the Summer of 2010. (Photo by Thad Parsons)

Andrews Geyser reaches heights of over 80 feet without mechanical aids.  Its water supply is a pond located nearly two miles away at the Inn on Mill Creek.  The Inn’s property contains the dam built in the late 19th century by the railroad and the Long Branch of Mill Creek feeds the pond.  A 6-inch-diameter (150 mm) cast iron pipe runs downhill to the basin, where it exits a half-inch nozzle.  The combination of a 500-foot change in elevation and the nozzle’s restriction powers the fountain.

During the winter, a cone of ice, with spray exiting its top, up to 50 feet tall can form and a permanent rainbow can generally be found on the fountain’s south side.