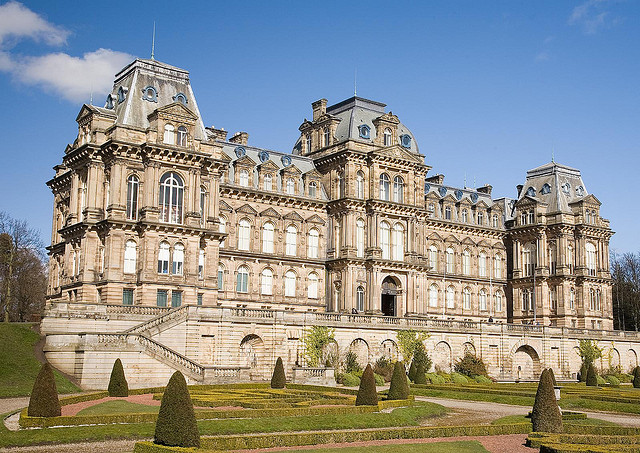 The Bowes Museum is the former home of John and Josephine Bowes, avid collectors of European art in the late 19th century. The building, grounds and collections are themselves worth a visit, but the draw for a historian of science and technology is the Silver Swan, an automaton the Bowes’ purchased in France in 1872. It was built by English inventor John Joseph Merlin in the late 18th century, and first recorded as an attraction at the London Mechanical Museum of James Cox. 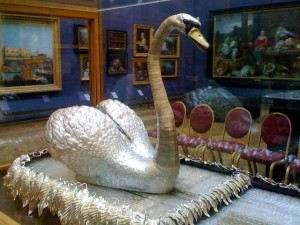 Every afternoon a curator inserts a key in the stand below the glass box where the swan sits in a nest of silver leaves; its repertoire of motions takes about 40 seconds. The swan arches its neck, peers around, and preens itself, then bends toward the water in front of it, simulated by rotating glass rods, to snatch a fish; it lifts its head with the fish, then cranes its neck to swallow it.

Unfortunately because the swan is kept in a glass box higher than (at least my) eye level, it’s difficult to get a close look at the water and the fish, which is a shame as part of the automaton’s motions include the small silver fish darting away as the swan’s beak breaks the water,. The museum has, however, developed an excellent and detailed exhibit on the history and working of the mechanism, after an extensive restoration project in 2008. This exhibit includes a great deal of technical information on how the mechanism was constructed and how it works, how it had been mistakenly restored earlier in its history, and the work involved in its 21st century restoration. 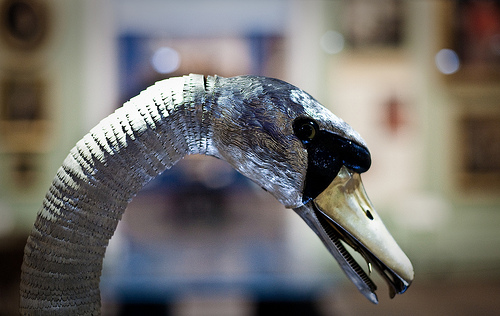 A close up of the head of the Silver Swan, by David Robson. Image licensed under Creative Commons Attribution-NonCommercial-NoDerivs 2.0 Generic license.