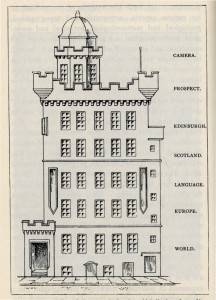 A diagram of the Outlook Tower (now Camera Obscura) from Patrick Geddes, Cities in Evolution: An Introduction to the Town Planning Movement and to the Study of Civics (Ernest Benn, 1915), p. 324

Edinburgh’s Camera Obscura is a building located at the far western end of Edinburgh’s Royal Mile, close to Edinburgh Castle, in the Scottish capital’s Old Town. Currently a tourist attraction featuring a “world of illusions,” the Camera Obscura should interest historians of science for two reasons: its late eighteenth-century origins as a museum for scientific instruments and the period during the late nineteenth- and early twentieth-centuries when the biologist Patrick Geddes (1854-1932) transformed it into the “world’s first sociological laboratory.”

Constructed in the 1770s by the Short family, who were makers of scientific instruments, what is now the Camera Obscura opened as a museum displaying the finest examples of the family’s work. These collections – in particular, the telescopes – served as the basis for the development of the building into a “Popular Observatory” during the early nineteenth century. This identity was further developed in the 1850s when Maria Short – the daughter of the museum’s founder – purchased the townhouse next door to the museum, installed a camera obscura on top of it, and renamed the enterprise “Short’s Observatory and Museum of Science and Art.”

However, in 1892 the museum was bought by Patrick Geddes: a protégée of “Darwin’s bulldog” T. H. Huxley and the professor of botany at the University of Dundee. Although Geddes had begun his career in the late 1870s as an experimental biologist he was also renowned outside the scientific community for his efforts to use he what he had learned in Huxley’s laboratory to improve conditions in Edinburgh’s slums. Inspired by the belief that evolutionary ideas could be the basis for social progress, Geddes and his wife, Anna, had moved into James’ Court – a tenement block close to Short’s Museum – during the early 1880s and set about rejuvenating the area by repairing dilapidated buildings and establishing communal gardens. Such was the success of this programme that scientific thinkers and social activists, including the infamous Russian anarchist Peter Kropotkin, visited the Geddeses at James’ Court to see what they had achieved. 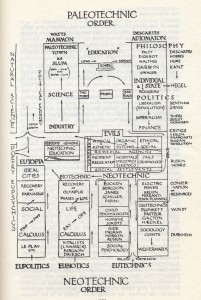 A diagram (drawn by Geddes’ collaborator Victor Branford) of an exhibition that was held at the Outlook Tower in 1910, which is from Victor Branford, “The background of survival and tendency as exposed in an exhibition of modern ideas,” Sociological Review, 18 (1926): p. 207.

This programme for social improvement was driven by Patrick Geddes’ efforts to develop a new theoretical framework for social science and his purchase of Short’s Museum was part of his plan to communicate his social scientific ideas to a wider audience. Renaming the museum the “Outlook Tower,” Geddes used the building to host exhibitions that explored how Edinburgh’s physical and cultural identity had evolved in the context of regional and world history. Beginning with the panoramic views from the roof of the Tower, visitors moved through exhibitions that encouraged them to think about how the Edinburgh they knew was the product of much wider forces. Geddes’ hope was that visitors would exit the Tower with a new perspective on the Scottish capital and an understanding of how they could play an active role in its future through schemes for social improvement such as his own.

On account of this effort to present a systematic picture of the shaping of people and society, the Outlook Tower was praised as “the world’s first sociological laboratory” in the American Journal of Sociology in 1899. However, despite this recognition and visits from the likes of the psychologists Lloyd Morgan and William James, Geddes’ project at the Tower gradually lost momentum during the early twentieth century. In part, this loss of momentum was a consequence of the financial problems that dogged Geddes’ work but it was also linked to his decision to leave Edinburgh for India in 1914.

In the mid-twentieth century the Tower passed into the hands of the University of Edinburgh, who subsequently sold the building to its current owners. Despite being renamed and turned to more explicitly commercial purposes, the Tower still retains much of the spirit of its late nineteenth- and early twentieth-century usage. Whilst plaques celebrate Geddes’ work, the camera obscura and views from the building’s roof allow visitors to appreciate what a powerful tool the Outlook Tower must have been for communicating ideas about the wider context in which cities exist and develop. In this sense, Edinburgh’s Camera Obscura is a testament to late Victorian and Edwardian beliefs in the power of evolutionary ideas to make sense of the world around us.