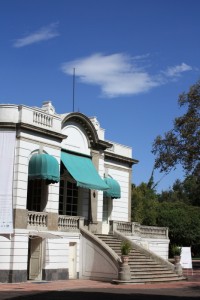 Casa de Lago it is nowadays one of the most traditional venues for culture in Mexico City, thanks to its beautiful French-style building as much their numerous workshops and courses open to the public, despite the fact of being located in the gorgeous Chapultepec Park.

On 1908, by orders of president Porfirio Díaz, works began in order to construct a public park in Chapultepec Forest, as part of commemoration of the Centenary of Independence of Mexico. Casa del Lago, as its name indicates, was build next to the one of the lakes created at the same time on the border of Chapultepec Castle hills.

In the next years, the building functioned like one of the most important places for parties for politics and members of high society, for philanthropic meetings, and the head office of recently founded Automobile Club.

Mexico political instability caused that Casa del Lago for one time were abandoned, Chapultepec Forest headquarters were moved there on 1916, until former president Adolfo de la Huerta decided on 1921 to establish there his particular residence; when he decided on 1923 to postulate him again for presidency, the building was left on hands of Public Education Ministry.

On March 1929, Biological Studies Direction of Agriculture Ministry was transferred to Casa del Lago; nevertheless, due lack of budget, the Direction was on a difficult economic situation, despite of having the National Herbarium and a valuable library. The next year, with just created National Autonomous University of Mexico (UNAM), buildings dedicated to scientific research became part of it, including the Biological Studies Direction, and from that moment was constituted the Biology Institute, and professor Isaac Ochoterena was designated like its first Director.

In just five years, dedication and efforts of the Institute allow that it became venue of the VII American Scientific Congress, a good sign of international recognition gained.

On 1953 the Biology Institute was moved again, now University City, its present location. Casa de Lago was abandoned again, until 1959, when Mexico City Local Government and UNAM agreed to create the first cultural building related to UNAM now outside the new campus.

By Juan Manuel Rodriguez Caso Not so far from Mexico City is Puebla, a place famous for its beautiful centre, plenty of well