It was probably not too difficult to come across something having to do with Charles Darwin when visiting Cambridge, England before 2009. Following that year’s celebrations (of Darwin’s birth in 1809 and publication of On the Origin of Species in 1859), I can imagine it is guaranteed Darwin will cross your path. I visited Cambridge in the summer of 2009 to attend a conference about, well, Darwin. I spent two days beyond the conference exploring the town and visiting sites related to Darwin with Richard Carter, whom we can thank for Darwin’s portrait gracing the ten pound note.

It was at Cambridge that Darwin took up a increased interest in natural history, and thanks to his cousin William Darwin Fox, also at Christ’s College, a fondness for beetles. Darwin would later reminisce on several occasions about his beetle collecting adventures. For example, in his Autobiography:

“I am surprised what an indelible impression many of the beetles which I caught at Cambridge have left on my mind. I can remember the exact appearance of certain posts, old trees and banks where I made a good capture. The pretty Panagaus crux-major was a treasure in those days”
p. 63. 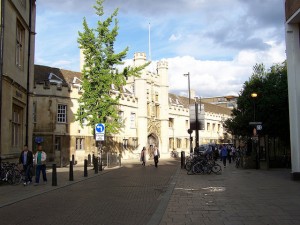 Cambridge is also where he met two of his mentors, botanist John Stevens Henslow (who recommended Darwin for naturalist on HMS Beagle) and geologist Adam Sedgwick, who would both take issue with his transmutation theory years later. His older brother Erasmus was also at Cambridge, and Darwin sent three of his sons there as well. Some of the museums in Cambridge now hold specimens Darwin collected around the world. The Cambridge University Library holds many of his documents, including letters, and Cambridge University Press has published much about Darwin, including the correspondence series.

Darwin’s life in Cambridge began in January 1828, and since he started at Christ’s College, University of Cambridge, well into the academic year, he had to find lodging away from the college. Luckily for him, he found one just a minute’s walk from the college. Darwin stayed in a room above a tobacconist on Sidney Street, which is now marked with a plaque outside a Boots pharmacy store: 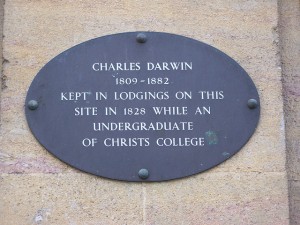 Darwin’s college rooms at Christ’s, which he took up in October 1828, have been restored by historian of science John van Wyhe (director of The Complete Work of Charles Darwin Online). According to van Wyhe:

“[c]learly a wide variety of activities took place in Darwin’s rooms. He read for his College curriculum, wrote letters, compared his captured beetles with published descriptions in his copy of Stephens Systematic catalogue of British insects and carefully pinned the beetles to cork boards. He had friends to coffee, and in the evenings they sometimes dined there and would then drink wine and play cards”
p. 6 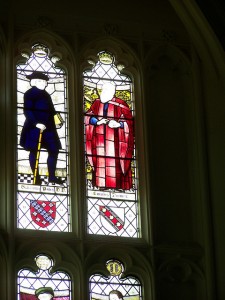 While the Tutor of the College thought Darwin was practicing with a horse-whip in his rooms, he was in fact blowing out a candle with the puff of air from a still-capped shotgun. That shooting practice surely went toward Darwin’s collecting practices in the field.

There is an old Cambridge rumor that Darwin’s Christ’s College rooms were once those of theologian William Paley, whose Natural Theology Darwin read while at Cambridge. In the College Hall, a stained-glass portrait of Darwin rests next to that of Paley.

In December 1831, Darwin left England aboard HMS Beagle, and returned in October 1836. Darwin went back to Cambridge in December following a visit home to Shrewsbury. He took lodgings at 22 Fitzwilliam Street, and here Darwin organized his specimen collection from the voyage. Only a few months passed before Darwin decided he needed to move to London, to enter into the scientific community and farm out his specimens to zoologists, botanists, and geologists of repute. Janet Browne described this lodging as Darwin’s “temporary centre for a storm of industry” (p. 346). Today, the Fitzwilliam lodging is marked by a stone plaque.

While Cambridge took little of Darwin’s more than seventy years of life, this place had profound influence on the creation of a young naturalist. Today, the city marks with plaques, sculpture, and exhibits one of its most famous students, who deemed his three years at Cambridge, as he wrote in his Autobiography, “the most joyful in my happy life; for I was then in excellent health, and almost always in high spirits” (p. 68). 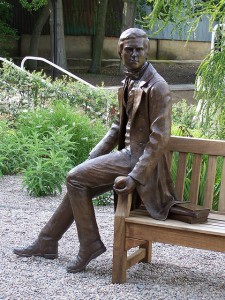 Barlow, Nora, ed., The autobiography of Charles Darwin 1809-1882. With the original omissions restored. Edited and with appendix and notes by his grand-daughter Nora Barlow, London: Collins.

Replica of Darwin bust by William Couper (info on original)

Replica of portrait by Walter Ouless in the College Hall

“Endless Forms: Charles Darwin, Natural Science and the Visual Arts” at the Fitzwilliam

“Darwin the Geologist” at The Sedgwick Museum of Earth Sciences

“Beetles, Finches and Barnacles: the Zoological Collections of Charles Darwin” at the Zoology Museum

Cambridge University Botanic Garden, frequented by Darwin and holding some of his specimens

Bust of Darwin at Darwin College