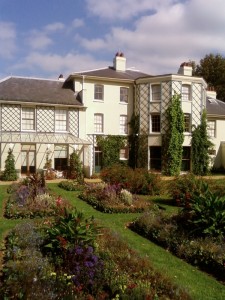 In 1842 Charles and Emma Darwin settled in the rural Kentish village of Downe. Down House (spelled differently from the village) was to remain their home for forty years, an occupation ending only with Emma’s death in 1896. (Charles died there in 1882.)

Darwin recorded in his autobiography that when they first found the house he ‘was pleased with the diversified appearance of the vegetation proper to a chalk district … and still more pleased with the extreme quietness and rusticity of the place’. At Down he hid away from visitors, even locating a mirror outside his study to warn him when someone was approaching.

Yet in this quiet place Darwin received communications and visitations from naturalists and men of science worldwide, weaving together his grand picture of nature that was expounded in The Origin of Species (1859) and later writings. Down House was also the site of his own experiments and observations; no problem was too trivial or too minute to be worthy of his patient elaboration. Dotted around the grounds of the house are the sites of these experiments, concerning worm burrowing and, in the hothouse, carnivorous plants and orchids. 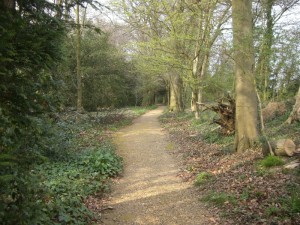 Elsewhere in the gardens one can retrace Darwin’s steps along the peaceful Sand-walk, where he paced daily to mull over his information and formulate his arguments. Charles and Emma planted this avenue shortly after their arrival, choosing a variety of native trees and flowers. Its constant susceptibility to invasive species of weed proved an immediate and frustrating instance of natural selection in action.

The house itself offers glimpses of the sentimental Darwin; permitting his children to toboggan down the stairs on a tea-tray must surely have interrupted his peaceful contemplations. This was not a house but a home. Each room has been reconstructed as far as possible based on photographs taken in the 1870s; Darwin’s study is recreated as it would have been, complete with bucket in the corner for those moments when his mysterious illness overtook him.

As a historian, I find myself slightly uncomfortable with the canonisation that inevitably accompanies the reconstruction of sites such as Down House. The English Heritage web site (9 March 2011) even refers to it as a ‘place of pilgrimage’. Such a construction of historic sites can result in unintentional bathos (here’s where the great man’s bottom sat), or more seriously in historic bias, creating the impression that only Darwin was the source of evolution by natural selection, and that his ideas came to him clear and perfect, the same in form as we know today.

But even so … it’s undeniably something very special to come here, to see the home and gardens that produced some of the most enduring science, history and even myth of our times. Here you can catch a glimpse of the oft-forgotten cast of women, children, servants, visitors et al who are all a part of the ‘Darwin’ story. Highly recommended.