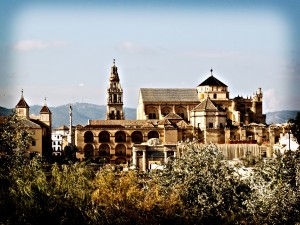 In Cordoba we can feel closer than in any other Spanish city to erstwhile Islamic intellectual activity. For one thing, the city was the birthplace of the two greatest philosophers of the twelfth century, Ibn Rushd (who remained here for most of his life) and Maimonides (who moved to Cairo as a youth). For another, the Mezquita, the great mosque, has been preserved in all its grandeur – unfortunately with a garish Christian church built within its walls, making for a truly bizarre combination of architectural styles. And the mosque is undoubtedly where teachers and pupils would gather for discussion and where scribes would make their copies, for classrooms and libraries lay normally within the precincts of mosques.

Adjacent to the Mezquita is the old Jewish quarter (Juderia) , with narrow streets filled with lively crowds and, on summer evenings, the gay sound of guitars and flamenco dancers. There is a Plaza de Maimonides here and a statue of Maim on ides in the Plaza de Tiberiades. There is a statue of Averroes (Ibn Rushd) in the loco, where craftsmen now have their stalls. There is also a municipal museum, but don’t expect any reverence there for the golden years of yore-the museum is devoted almost exclusively to bullfighting and to Cordoba’s famous matadors.