Ask Philadelphians what is the fanciest address in the city and they are likely to say Rittenhouse Square. Located at the intersection of Walnut Street and 19th Street, Rittenhouse Square houses many posh hotels and restaurants. Few locals know, however, that the prime location is named after astronomer and mathematician David Rittenhouse.

David Rittenhouse was born in 1732 in an early industrial community, set on a stream, that was then outside the boundaries of Philadelphia. Later incorporated into the city, the enclave is now called Historic RittenhouseTown. 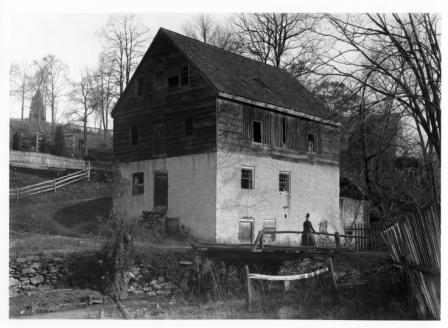 Circa 1702 Mill, photographed in 1890, courtesy of Historic RittenhouseTown.

The story of RittenhouseTown dates back to the 17th century, when German-born papermaker William Rittenhouse emigrated from Holland to Philadelphia and established the first paper mill in the Colonies. Because of its success, a second mill and bakehouse were constructed, along with the Rittenhouse Homestead. Generations of papermakers, weavers, and other industrial workers lived in the community supplying important products for the colonies.

Historic RittenhouseTown is open for tours. Surrounded by parkland, it is located at 206 Lincoln Drive in the northwest part of Philadelphia. It is open summer weekends from 12:00 pm to 4:00 pm. It is also open on weekdays, if arranged in advance, for groups of 10 or more. 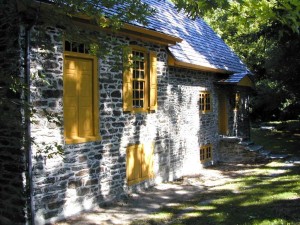 The great-grandson of William, young David demonstrated great mathematical and scientific prowess, studying Newton’s Principia on his own. He became adept at building mechanical devices and established his own clock-making and instrument-making business.

Combining his scientific interests, particularly in astronomy, with his mechanical skills and craftsmanship, Rittenhouse set out in 1767 to build an orrery: a machine replicating the motions of the planets and moons in the Solar System using Kepler’s laws as a guide. He also constructed a modified refracting telescope to record the transit of Venus.

In 1786, politician Francis Hopkinson, a friend of Rittenhouse, sent him an intriguing question, “why… when he looked through a fine silk handkerchief at a light source, did he see a grid of dark lines which did not move at all, even though he moved the handkerchief back and forth?” (Hindle, p. 276)

After repeating Hopkinson’s experiment, Rittenhouse decided to resolve the issue by developing what became the first diffraction grating. By placing fine hairs parallel to each other, he constructed a grating with about 250 lines per inch. He then turned to the subject of precision timekeeping and astronomical measurement, constructing the first collimating telescope.

Rittenhouse was honoured much in his life. In the 1780s he was appointed the University of Pennsylvania’s first Professor of Astronomy and Vice-Provost. In 1791, one year after the death of Franklin, Rittenhouse was elected to be the second president of the American Philosophical Society. Rittenhouse held that position five years, until his own death. In 1825, Philadelphia renamed what was previously called Southwest Square after him, and Rittenhouse Square soon became known as one of the fanciest locations in the city. The physics and mathematics building at the University of Pennsylvania is named David Rittenhouse Laboratory in his honour.

I thank Chris Owens, Director of Historic RittenhouseTown, for his help and for supplying the photos for this article.

Parts of this article are adopted from “Philadelphia: Life, Liberty, and the Pursuit of Physics,” by Paul Halpern, published in Physics in Perspective.