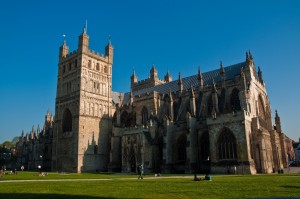 The building of Exeter Cathedral started in 1050, when Bishop Leofric moved his see from Crediton, seven miles to the North-West of Exeter, to the city of Exeter. At the same time, Leofric founded the Cathedral Library and furnished it with books. As such, it contains such treasures as the Exeter Book, also known as the Codex Exoniensis, a tenth-century anthology of Anglo-Saxon poetry, and the Exon Domesday book, a composite land and tax register associated with the Domesday Survey of 1086, covering much of Southwest England. Both of these works are normally on display in the library.

Interestingly for historians of science, and in particular for historians of medicine, the Cathedral Library comprises numerous scientific and medical works, due to various donations throughout the centuries. At the beginning of the 18th century, the prebendaries Robert Burscough (1651-1709) and Humfrey Smith (1655?-1709) bequeathed their libraries to the Cathedral Library. It also holds a large section of the library once housed in the Royal Devon and Exeter (RD&E) Hospital, founded in 1741, and today still the most important hospital in Exeter. The collection, which was transferred back to the Cathedral Library in 1948, mainly comprises books from the rich personal library of the local physician Thomas Glass (1709-1786) who in his will left ‘to the Dean & Chapter of the Cathedral Church at Exeter all my medical printed Books on condition they will assign them a place in their Library…& permit any Physician being an inhabitant of the City of Exeter to have recourse to them at proper times in the Library.’ Finally, the medical and scientific holdings of the Library were greatly enhanced with an indefinite loan of early books from the RD&E Hospital in 1964. 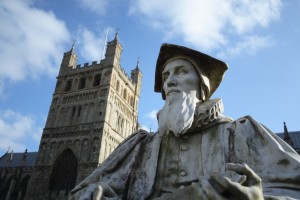 The scope of the collection is wide: it includes straightforward medicine and science topics, but also numerous peripheral subjects, such as astrology and alchemy, phrenology, agriculture, navigation, and wine-making amongst others. This makes the Cathedral Library a research resource of great interest for any historian of science and medicine.

The Cathedral Library closed its doors to scholars and the public on 17 December 2010, and will be closed throughout 2011, as it is undergoing an upgrade of its premises. The Library and the Archives will be located in one building in the West Wing of the Bishop’s Palace, providing in part improved access to documents and records and improved reading areas. During the closure, exhibition panels will be in the Cathedral in order to introduce the visitor to the Library collections.

LJ Lloyd and Audrey Erskin, The Library and Archives of Exeter Cathedral’ (Exeter, 2009).