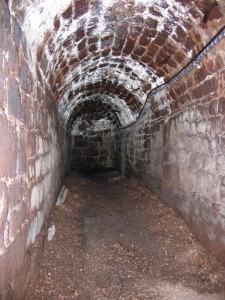 Dating from the 14th century, Exeter’s medieval underground passages were built to house the lead pipes that brought fresh water from natural springs in fields outside the city wall into the city centre. The passages lie between 4 and 6 metres underground stretching 425 metres across the city centre. Amazingly 80% of the tunnel network survives and much of it can be explored with a travel guide. The pipes often sprang leaks and repairs could only be carried out by digging down. The solution was a vaulted network lined with stone which was big enough for workers to climb underground to carry out repairs. The first passage was built between 1346 and 1349 to serve the city’s cathedral. The water pipes ended at a fountain in Cathedral Close that supplied clean water to Exeter’s clergy.

Exeter was becoming quite wealthy and the cathedral was built in response to Salisbury Cathedral. The stonemasons who had been working on the cathedral were set the task of constructing the underground passages. The supply of clean water was inadequate for the city population and this resulted in the construction of a second tunnel between 1492 and 1497 – known as The City Passage. As the woollen trade developed, a number of wealthy merchants decided they wanted their own water supply. There were always political divisions between the city and the cathedral, and the merchants wanted to ensure they had a separate supply they could rely on. Only the wealthiest residents could afford to have the water piped directly to their homes.

For everyone else, water was dispensed through an ornate public fountain, called The Great Conduit, at the junction of South Street and the High Street. Sadly the fountain itself was demolished in the 18th Century. In the 1640s a section of The City Passage was blocked off during the English Civil War to prevent the tunnel being used as an entry point into the city. The lead pipes were removed for casting into bullets and the passage filled with rubble. However, the passage was repaired and the water supply restored after the war ended.

Historians of medicine will be interested in the fact that further changes were made following an outbreak of cholera in 1832 when a more healthy water supply was developed – fed from a treatment works at Pynes Hill. The Board of Health commissioned the engineer James Golsworthy to make some changes to the passages. He replaced the lead pipes with cast iron ones and lowered the floor level to improve the water flow. This meant that the pipes sprang leaks less often because the floor was more level. The passages continued to supply water to the city until 1857 when one of the wells was damaged by the building of a new railway cutting. By 1901 the passages had been virtually forgotten. During the Second World War part of the tunnel network was used as a shelter from German bombing raids – a place of safety for 300 city residents.

Guided tours have taken place since 1933. Originally there was no lighting and the tours were no more than a scramble through conduits that stretch out below the streets. The visitor experience has improved since then and a new interpretation centre, opened in 2007, tells the story of the passages, their innovative use of water and explores medieval life in the city. To book your tour contact 01392 665 887