Farnborough and the History of Aviation, England 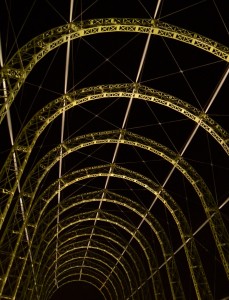 This small Hampshire town is the birthplace of British aviation, being the site of both the UK’s first powered heavier-than-air flight, and the location where its first military aviation units were formed. In 1905, the Royal Engineers moved their Balloon Factory and Balloon school to a site on Farnborough common; these establishments both trained, and manufactured the equipment for, the Army’s observation ballooning units. The American showman and aviation enthusiast Samuel Cody had invented and sold a box-kite system to the Army for observation, and he was allowed to continue his researches into gliders and powered aircraft at the Factory. From September 1908 he performed a number of short hops on the common, culminating in a flight of over 1,600 feet on 16 October 1908 in his ‘Army Aeroplane no. 1,’ generally recognised as the first powered aeroplane flight in the UK.

In 1911 the Air Battalion Royal Engineers, the predecessor of the Royal Flying Corps (and so also of the Royal Air Force) was formed at Farnborough. The Balloon Factory was soon renamed the Royal Aircraft Factory, and was responsible for designing equipment for the Army’s air units, as well as conducting aeronautical research. During the First World War, the factory’s design role became a source of conflict with the aviation industry, and after the conflict, the Factory’s role was changed to be solely research. Reflecting the change, it was renamed the Royal Aircraft Establishment (RAE), and for the next 80-odd years it was to be one of the world’s premier aerospace research centres. In 2001, much of the RAE site was privatised as part of the Qinetiq group spun off from the UK’s defence laboratories. The airfield itself is now owned by the TAG group and operated as a business airport, although the Farnborough Air Show (an industry and trade exhibition) is still held there biannually. 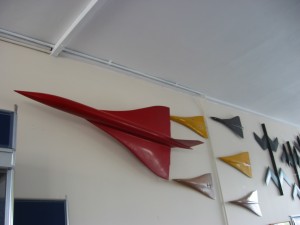 Run largely by former RAE staff, the Farnborough Air Sciences Trust museum is housed in a 1907 building on the edge of the airfield. In 1914 Hugh Trenchard, the future ‘father of the Royal Air Force,’ used this as his offices whilst he organised the training of recruits. Outside the building are a number of aircraft used in research at the RAE; inside the museum is a large collection of artefacts from the RAE, ranging from wind tunnel models through to jet engines and supersonic target drones. Next to Trenchard House is a pavilion housing a replica Cody Army Aeroplane; the museum also has a library and collection of documents obtained from the RAE library, although the cataloguing effort is still on-going.

Looking out through the airfield perimeter fence from behind the museum, you can see the final surviving example of the ‘black sheds,’ aircraft hangars built for the RFC in 1912. Beyond the hangars on the other side of the airfield you might just be able to make out the old RAE wind tunnels.

The museum is open Saturdays and Sundays, 10AM-4PM, but they will often open at other times if asked far enough in advance. 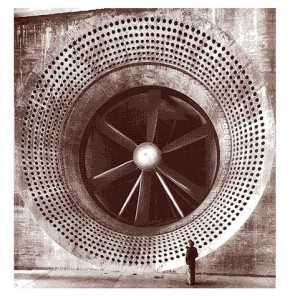 On the other side of the airfield, many of the RAE’s buildings have been converted into offices as part of the IQ Farnborough Business Park. Q.134, formerly home to the RAE’s Weapon Aerodynamics department, is now known as ‘The Hub,’ and contains an exhibition about the site’s history. The building also houses the National Aerospace Library, a joint venture between the Royal Aeronautical Society and Hampshire county libraries. Open Tuesdays-Fridays from 10AM-4PM, this is probably the best single collection of aeronautical materials, both technical and historical, in the UK. If you are in need of refreshment, the Aviator Café in the Hub will provide sustenance. Coming out of the front of the Hub, you should be able to see the back of building Q.121 on your left. This building was part of the RAE’s wind tunnel complex, housing the massive 24-foot wind tunnel. Along with its neighbouring buildings R.52 and Q.134, it is Grade-I listed. Although generally closed to visitors, it is worth seeing if the buildings are open, as the 24-foot tunnel especially is very impressive.

If you go right as you come out of the Hub, you can see the skeleton of an airship hangar ahead of you. It is one of only three surviving pre-First-World-War airship hangars in the UK; in 1916 it was cut up and sections of its structure were used to build other buildings at the site. During the redevelopment FAST convinced the developers to re-erect the structure, allowing them to pull down the buildings that it had been used in. It now forms an impressive backdrop for office workers to eat their sandwiches in the sun against. 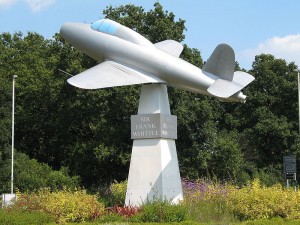 Other points of interest

There are two further memorials in Farnborough of aeronautical interest. The UK’s first jet aircraft was tested at Farnborough during the Second World War; whether the Frank Whittle Memorial Roundabout is a suitable tribute will be left to the reader to decide.

Past the roundabout are the headquarters of Qinetiq, the commercial successors to much of the work done at the RAE. Outside the main building is a replica of the ‘Cody Tree.’ In his early tests at Farnborough, Cody tied his aircraft to a tree stump to measure the propeller’s static thrust. The tree was kept on the airfield until the 1950s, when it was clear that the wood was deteriorating. In 1957 the RAE staff decided to use their knowledge of materials science to plasticise the tree, impregnating it with a resin compound. Unfortunately the tree continued to deteriorate, and in 1959 the RAE’s workshops cast a replica tree in aerospace-grade aluminium alloy. With the post-Cold-War contraction of the research facilities at the airfield, the ‘tree’ was moved down the road from the airfield to the Defence Research Agency headquarters. With the 2001 spin-off of Qinetiq, the building became the company’s head office, but the tree still remains as a link to Farnborough’s pioneering aviation past. 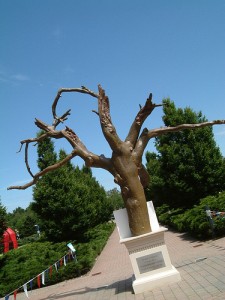 Rail: Farnborough has a number of railway stations; Farnborough Main station is served by regular trains from London Waterloo. The airfield is a 5-10 minute taxi ride from the station.

Car: Farnborough town is just off junction 4 of the M3; follow the A325 for the Farnborough Air Sciences Trust and the A327 for the Business Park.