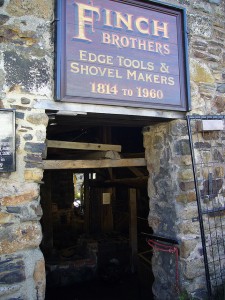 In the small hamlet of Sticklepath, on the northern edge of Dartmoor, the National Trust in combination with the Finch Foundry Trust have restored a nineteenth century working edge tool manufactory – not strictly speaking a foundry despite its name.  It was started by William Finch in 1814. The name Finch is one of four surnames, which Samuel Smiles states were traditionally associated with iron working. Three overshot water wheels provide the power for a tilt hammer, a drop hammer and a shear hammer.  In 1958 a water turbine was installed and a Hydram provides a better head of water but the business closed in 1960. Since everything is kept in working order, it is possible to see the equipment being used by a blacksmith.

Smiths have shaped wrought iron with hand held hammers for millenia. Water powered hammers are recorded from China in 20 AD but they only became common in Europe in the 12th century. Water powered stamp mills were used to break up mineral ores. Massive hammers raised by water power and then allowed to drop under gravity were used to turn blooms into more workable bar iron and particularly for fabricating articles from wrought iron, steel and other metals.  In such metal works, multiple hammers were powered via a set of line shafts, pulleys and belts from a centrally located water supply. However during the Industrial Revolution the trip hammer generally fell out of favour and was gradually replaced with power hammers worked by steam, and more recently by compressed air. 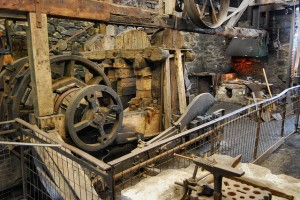 Traditionally iron workers have always celebrated on St Clement’s Day. There are still remnants of this tradition in the early iron working districts in the weald of Sussex and Kent. More recently it smiths from all over Britain have come to Sticklepath every 23rd November in order to demonstrate their skills and hold a competition to make decorative ironware – and this is open to the public.

Sticklepath was a hamlet of water mills. In 1814 William Finch leased Manor Mills, which had previously been a corn mill and gradually built up his business. Since he was born at nearby Spreyton, it is thought he may have gained his practical experience at the Tavistock Iron Works. Initially he installed a pair of tilt hammers, possibly purchased from them. Later he added power shears and an air blast sufficient to work half a dozen blacksmith’s hearths plus two furnaces, all powered by water. The business became known as The Foundary – but in practice it was a forge employing seven or eight blacksmiths producing up to 400 agricultural or mining tools a day.  Tools with a sharp edge needed to be ground on the water powered grindstone but the workmen found that half a day spent sharpening them was enough for any man, so apprentices were often sentenced to ‘put their nose to the grindstone’ for misbehaviour. Their travelling salesmen followed a regular circuit around the mining and china clay industries throughout the west of England and also visited agricultural merchants and ironmongers en route. To the rear of the main building is a store for the straw and reeds used for packing the tools prior to transportation. The Finch family business interests extended into corn milling, carpentry, wheel wrighting and since they puchased coal and coke in bulk – the sale of domestic fuel. The business only closed its doors in 1960 and many of their account books, catalogues and samples of their hooks, scythes, hay knives, forks and hoes are on display.

Directions: The Foundry is in the middle of Sticklepath just off the A30 east of Okehampton, Devon. If you ring them in advance they may be able to tell you when a blacksmith will be working there.