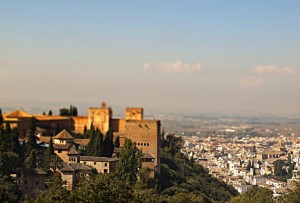 Cordoba was taken by the Christians in 1236, but Granada remained in Moorish hands until 1492, a refuge for artists and others who had been driven out of Cordoba, Seville, and elsewhere. Granada contains the most brilliant of all the products of Moorish architecture, the elaborate, intricately decorated Alhambra, with its gardens, courtyards, galleries, and statues-one of the artistic wonders of Europe. At one time Granada also had an acclaimed medical center and, at the time of the great plague, emissaries came here from all over Europe to consult (unsuccessfully) with local physicians. Where was the former medical center and have any of its buildings survived? There are no plaques or signs to tell us.