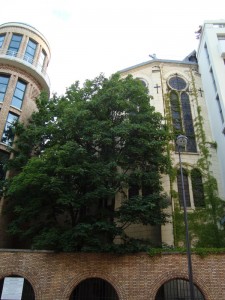 The Institut Curie, 11 Rue Pierre et Marie Curie, just a few hundred meters south of the Pantheon, was initially created explicitly for Marie Curie, with the name of “Institut du Radium.” It is today a modem research facility, but Marie’s former laboratory and office have been preserved as a kind of museum, which is open to the public by advance appointment. It contains some of Mane’s notebooks, instruments, laboratory coats, and a replica of Pierre Curie’s device for quantitative measurement of ionizing radiation-the essential tool for the discovery and purification of radium and other radioactive elements, because of the miniscule amounts contained in the native ores. Needless to say, the actual technical artifacts from the Curie period were highly contaminated and had to be subsequently destroyed. Scientific equipment on show in the museum dates from a later period, when Marie’s daughter Irene and her husband Frederic Joliot held sway in the laboratory. There are sculptures of Marie and Pierre in the Institute’s courtyard, done by a Polish artist for the celebration of the centenary of Mane’s birth in 1967.

It is important to appreciate that the fine institute we see here came to Marie Curie only late in life, at the end of World War I. As anyone even slightly aware of the Curie legend knows, Marie and Pierre’s discovery and purification of radium were done in the most wretched, cold laboratory imaginable, in the basement of the Ecole superieure de Physique et de Chimie. The site on the Rue Vauquelin, about 500 yards (500 meters) south of the present Institute, is marked by a commemorative plaque. There is another plaque at 24 Rue de la Glaciere (on the other side of the Seine, close to the observatory), to mark the apartment where Marie and Pierre were living at the time and where their daughter Irene was born in 1897. It was not until 1905 that reasonable laboratory space was provided for the Curies in the Sorbonne and Pierre himself never had the chance to use it, for he was run down and killed in 1906 by a horse-drawn carriage in the Rue Dauphine. (Mane’s health had begun to decline from the effects of radiation even before the Institut du Radium was opened. For the last 20 years of her life she lived close to her laboratory, at 36 quai de Berthune on the He St. Louis-another plaque indicates the place.)