Institute of Astronomy, University of Cambridge 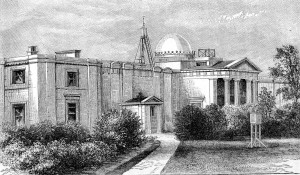 A 19th century view of the Cambridge Observatory

Astronomers have made their home in Cambridge since medieval times. John Holbrook, Master of Peterhouse, Cambridge (1418-36) compiled the ‘Tabulae Cantabrigienses’ for 1430 and C. Kyngeston a Fellow of Peterhouse made observations on the eclipse of the sun in Cambridge on 24 May 1517.  Still perhaps the most famous scientist to study in Cambridge was Sir Isaac Newton, who as a Fellow of Trinity College compiled his famous work the ‘Principia Mathematica’ published in 1687.

In 1704 the Rev. Thomas Plume left money in his will for a chair of astronomy, which became known as the Plumian Professorship.  The Plumian professor had access to an observatory built on to the Gate House of Trinity College from 1739 to 1797, and another observatory existed from 1765 to 1859 at St. Johns College [1].  However, there was a need for a modern observatory on a good site away from the smoke of the town.

The Cambridge Observatory was established on the western outskirts of Cambridge in 1823.  It was funded half by the University of Cambridge and half by public subscription.  Of the money raised, the largest sum was spent on the impressive neo-classical observatory building.  Money was then needed for instruments and for staff.

The Observatory was supervised by the Plumian Professor of Astronomy, who in turn reported to a University committee known as the Observatory Syndicate.  The Professor was provided with a house forming the east wing of the building.  The first Plumian Professor to take residence was Robert Woodhouse (1773-1827).  Woodhouse had published ‘An elementary treatise on astronomy’ in 1812, but by the time the Observatory had opened, he was already ill and died in December 1827.  The first effective Director of the Observatory was therefore G. B. Airy (1801-1892), who succeeded to the Plumian Chair.  Airy played a significant role in obtaining the Northumberland Telescope in 1838, a 12-inch refractor still present in a dome in the grounds [2].

When Airy left Cambridge to take up his post as Astronomer Royal in 1835, his successor as Plumian Professor and Director of the Cambridge Observatory was James Challis (1803-1882).  Challis lived at the Observatory until 1861.  In 1846 Challis carried out with the Northumberland Telescope a systematic search for a new planet, on the basis of calculations provided by John Couch Adams.  On the continent, the planet later to be called Neptune, was predicted by Urbain Jean Joseph Le Verrier (1811-1877) and discovered by J. G. Galle (1812-1910) and Heinrich Louis d’Arrest (1822-1875) on the night of 23 September 1846 at the Berlin Observatory.  Key to the success of Galle and d’Arrest was the possession of the star chart (Hora XXI Aquarius) of the Berlin Academy Star Atlas of Carl Bremiker.  This chart of the atlas had been printed in 1845 but had not yet been distributed.  It allowed Galle and d’Arrest to find the planet rapidly, whilst Challis had to map every star in the area [3]. 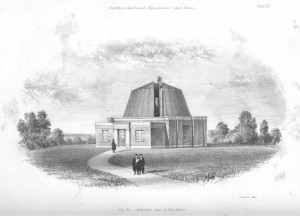 The Northumberland Telescope dome when new.

Adams, is of course best known for having predicted the position of the planet later called Neptune independently of Urbain Le Verrier in 1846.  In 1861 as Lowndean Professor, he also became Director of the Cambridge Observatory and took up residence in the East wing [4].  In 1884 he represented Britain at the international conference that decided on Greenwich as the Prime Meridian of the world.

On the death of John Couch Adams in 1892, Robert Ball, famous as an author and popular speaker in astronomy, took over as Director of the Observatory with the position of Lowndean Professor.  Ball also moved into the house on the East wing of the Observatory which he extended.

Eddington was Plumian Professor from 1913 to 1944 and lived in the Observatory until his death in 1944.  He is famous for having promoted relativity theory in the English-speaking world and proving it right with his 1919 eclipse expedition [5].  Indeed Einstein came to stay at the Observatory with Eddington in 1930.

The Institute of Theoretical Astronomy (IOTA)

The Institute of Theoretical Astronomy was the brainchild of Sir Fred Hoyle (1915-2001).  Fred Hoyle coined the term ‘Big Bang’ despite bitterly opposing the theory.  He pioneered the theory of the nucleosynthesis of elements in stars.  Hoyle was a controversial figure, with his theory of life in the universe and his science-fiction books.  The Institute was established in 1967 with a small group of Hoyle’s associates.  An article by John Walsh describes the political background to the founding of the Institute.  It was to concentrate on theory, with no teaching responsibilities and with access to a computer.  It had its own building with library set in the Cambridge Observatory grounds [6].

The Institute of Astronomy (IoA) 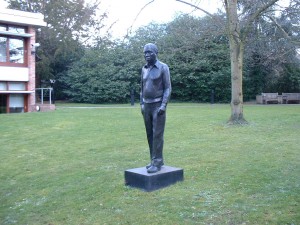 The Institute of Astronomy was created on 1st August 1972 by the amalgamation of the Cambridge Observatories and the Institute of Theoretical Astronomy. The IoA is one of the largest centres for astronomical research in the UK, with about 140 astronomers.  Active areas of research are cosmology, gravitational lensing, X-ray astronomy, galactic astronomy, clusters, stellar physics and instrumentation.  Most observations are made with mountain-top or space telescopes, but some observations are still made on-site.

Over the years, many famous astronomers, including Stephen Hawking, have worked at the Institute. The current Plumian Professor and Director of the IoA is Robert C. Kennicutt from Arizona whose interest is in extragalactic observational astronomy.  Lord Rees, the current President of the Royal Society also has an office at the Institute.

In November 2009 the Kavli Institute for Cosmology Cambridge opened on our site as a joint centre with other Cambridge departments with an interest in observational cosmology.

This 8-inch refracting telescope made by Cooke & sons in 1864 went through a series of wealthy amateur owners before arriving in Cambridge in 1929.  It belongs to the Royal Astronomical Society, from whom it is nominally on loan to the University.