Are you looking for something off the tourist track?  What about something that at first sight makes little sense? 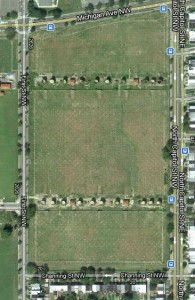 Then the McMillan Sand Filtration Site is for you!  Unfortunately, it is closed to visitors but you can the site is bounded by (and you can get good views of it from) North Capitol Street, Channing Street NW, 1st Street NW, and Michigan Avenue NW.  Today, one can glimpse the two paved courts that are lined by regulator houses, tower-like sand bins, sand washers and the gated entrances to the underground filter cells.  Below grade at the twenty-five acre site, there are twenty catacomb-like cells, each an acre in extent, where sand was used to filter water from the Potomac River by way of the Washington Aqueduct.  The treatment was a slow sand filter – a biological treatment system that provided a slow, steady flow of clean water.  For large-scale municipal purposes, the slow sand filter is inefficient and it was replaced in 1985 with a rapid sand filter (which is located across First Street at the McMillan Reservoir.

Diagram of the Washington City Tunnel by the US Army Corps of Engineers.

Before water can be purified, it must get to the McMillan complex and it has always arrived the same way, via the Washington Aqueduct.  The aqueduct was commissioned by Congress in 1852 and construction began in 1853 under the auspices of the US Army Corps of Engineers (who still own and operate the system).  It gradually opened starting on 3 January 1859, was fully open in 1864, and has been in continuous use since.  Water travels through the pipeline from Great Falls to the Dalecarlia Reservoir, and then to the Georgetown Reservoir.  From Georgetown, the water leaves via the “castle” on McArthur Boulevard NW, through an arrow-straight tunnel to the pumping house on 4th Street at the McMillan Reservoir.  The aqueduct is listed as a National Historic Landmark, and the Union Arch Bridge within the system is listed as a Historic Civil Engineering Landmark. 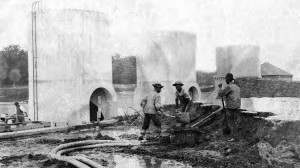 McMillan sand filtration site under construction. Photo by the US Army Corps of Engineers.

The McMillan reservoir, which still holds untreated water for D.C., opened in 1902 and is a dammed stream valley.  The water that flowed through the valley became Tiber Creek and flowed into the Potomac following what is now Constitution Avenue. To clean the water before it was distributed to residents, a filtering plant also had to be constructed as part of the McMillan complex.  At the turn of the 20th century, there was a debate regarding the best practice to purify water – chemical (e.g. chlorine) versus biological (e.g. slow sand).  In D.C., slow sand filtration won out and Congress provided the Army Corp of Engineers with money to build the McMillan Sand Filtration Site. 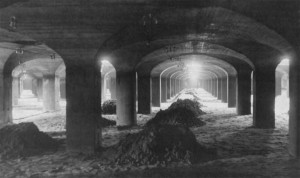 Photo of Sand Pit being filled with sand. Photo from the US Army Corps of Engineers.

Sand filtration is pretty simple.  Dirty water enters the pit, which contains a two-foot layer of sand, percolates through the sand and is clean when it reaches the bottom, where it is drawn off by a pipe.  While the operation of the filter is simple, the process by which it cleans the water is not.  A slow sand filter works because of the formation of a gelatinous layer called the hypogeal layer or Schmutzdecke in the top few millimetres of the fine sand layer.  It forms in the first couple weeks of operation and consists of bacteria, fungi, protozoa, rotifera, and aquatic insect larvae.  As the Schmutzdecke ages, more algae develops and larger aquatic organisms appear, including bryozoa, snails and Annelid worms.  The Schmutzdecke provides effective purification in potable water treatment, while the underlying sand provides a support medium for this biological treatment layer.  The water produced from a well-managed slow sand filter can be of exceptionally good quality with 90-99% bacterial reduction.  Slow sand filters slowly lose their throughput volume as the Schmutzdecke grows, and it necessary to refurbish the filter to maintain volume (which means removing/disturbing the Schmutzdecke and allowing it to regrow). 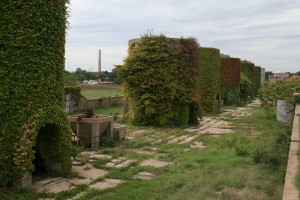 Today, the most visible sign of the site’s history are the overgrown clean sand silos and regulator houses.  The rest of the site is covered in grass, as it was when it was designated the McMillan Reservoir Park in 1906 by Secretary of War William Howard Taft.  It was a memorial to to Senator James McMillan (R-Michigan) for his work as chairman of the Senate Commission on the Improvement of the Park System and his efforts in shaping the development of the city of Washington at turn of the century (aka the McMillan Plan).  After Taft became President, the site was officially designated a park by Congress in 1911.  Originally conceived as part of the “necklace of emeralds” that would ring the city in permanent open green space and restore much of L’Enfant’s original city plans.   In total, the forward-looking plans made by the McMillan Commission called for: re-landscaping the ceremonial core, consisting of the Capitol Grounds and Mall, including new extensions west and south of the Washington Monument; consolidating city railways and alleviating at-grade crossings; clearing slums; designing a coordinated municipal office complex in the triangle formed by Pennsylvanian Avenue, 15th Street, and the Mall, and establishing a comprehensive recreation and park system that would preserve the ring of Civil War fortifications around the city.  The implementation of the McMillan Plan involved the leading civil engineers, urban planners, artists, architects, and designers of the time and at the Reservoir alone, landscape architect Frederick Law Olmsted, Jr., engineer Allen Hazen, sculptor Herbert Adams and architect Charles Platt were involved.  While the engineering work was paid for by the Army Corps, the landscaping work was paid for by the family of Senator McMillan. 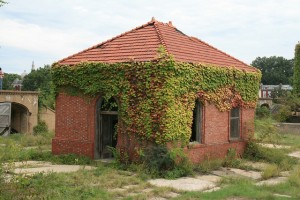 Regulator houses such as this one contained valves for controlling the flow of water through each cell.

While it was a functional piece of real estate because of the sand filter, it was topped by “an imaginative combination of landscaped park … personally supervised by Olmsted.”  In a racially segregated D.C., the park was open to all and residents from the ethnically diverse local neighborhoods were delighted to use the park’s amenities.  Courting couples promenaded, families picnicked, and boy played ball games on top of the vaults full of white sand.  Unfortunately, because of security concerns about the safety of Washington’s water supply, the site was closed to the public during World War 2, when a fence was erected around the site; today, it is only open to special visitors and on specially arranged biannual tours.

From its’ completion in 1905 until the Army Corps sold the Sand Filtration Site in 1987, the site was protected from development.  In 1986, the Army Corp declared the land as surplus and the General Services Administration arranged to sale it.  The The District of Columbia government purchased the site in 1987 for $9.3M, in order to facilitate development. Since the time of purchase, the property has been vacant and has deteriorated severely due to lack of maintenance.  Today, the McMillan Park Committee is fighting to maintain it openness and historic character, while the D.C. government is  considering site for dense commercial and residential development. The following video provides an overview of the planning arguments surrounding the site and some great historic images of the area.