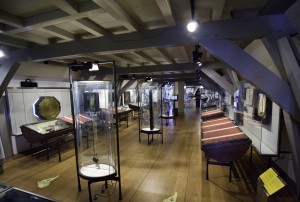 The most interesting building of the present university is at No. 73 Rapenburg, one of the prettiest streets in Leiden, with a canal down the middle. The building contains an Aula (or Senate Chamber), the walls of which are lined with handsome portraits of most of its early and some of its more recent professors, and there is a lovely wooden staircase leading up to it. Unfortunately, this chamber is still in use for examinations and other university functions, and it is not open to the public, but the rest of the building can be admired. (The doorway to No. 73 also provides access to the university’s botanical garden.)

Boerhaave Museum. This museum, named after the former professor and physician, has been in existence for many years, but it has recently been completely restructured and installed in brand new quarters on the site of the former Boerhaave hospital. At an artistic level it has been beautifully done-the renovation retains the original architecture and the exhibit layout is spacious and encourages unhurried perusal. The emphasis is historical rather than didactive. with contents arranged in chronological sequence and not by subject area. We are made acutely aware that the division of science into specialized fields is a recent phenomenon and that in Leiden’s heyday the distinction between physics, chemistry, and even medicine was blurred. The museum has a commendable international flavor, less chauvinistic than might be expected, though achievements of Netherlands scientists are of course properly stressed. The Dutch have long been instrument makers for much of the world and a predominance of instruments in the exhibits reflects that-the collections of surgical tools, telescopes, and microscopes are especially noteworthy. Even seasoned specialists will be fascinated by the technical advances that the chronological style of the museum naturally unfolds.

One of the highlights of the museum is a faithful reproduction of Boerhaave’s anatomy theater, clearly patterned after the prototype in Padua. Individual instruments include three of van Leeuwenhoek’s original microscopes (which prove to have extremely tiny lenses), Leyden jars and batteries, Huygens clocks, as well as more modem items, such as the first artificial kidney (dialysis machine), designed by Dutchman Willem Kolff in 1943, and a prototype electron microscope manufactured by the Philips Co. in 1947. The museum also has a fine archival library, which occupies the site of the cells in which madmen were kept in the old hospital. (Is there a hidden message here?)