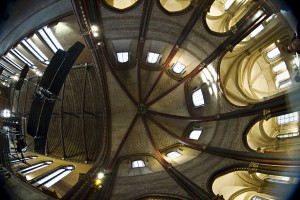 Here we have a museum as different from the City of Science and Industry as one can imagine. It was created by an act of the revolutionary Convention in 1794. “Let original models of instruments and machines which have been invented be deposited here,” it was decreed, and “let the construction and use of tools be explained.” The decree has been followed ever since and as a result we have before us a vast all-encompassing collection of museum pieces. Clocks, watches, trains, bicycles, motor cars, aeroplanes, refrigerators, musical instruments, electrical generators, microscopes, telescopes-you name it and you will find it, although staff tell us that they can actually display at anyone time less than one-tenth of their possessions. An extra dividend is the building itself, the former priory of St. Martin-des-Champs, part of which dates back to the twelfth century.

This accumulation of objects would not by itself fall within the scope of this book were it not for the museum’s deliberate stress on pure science and its technical instrumentation, with clearly written accompanying explanations. There are several of Pascal’s mechanical calculating machines, dating from 1642; Buffon’s burning mirrors to focus the rays of the sun (a la Archimedes): electrical devices that trace the history of our understanding of electricity from the two-fluid theory of the Abbe Nollet, through Volta, Coulomb, Ampere, and beyond; optical devices all the way up to early electron microscopes; even an early cyclotron is shown. There is an excellent exhibit on the standardization of weights and measures.

Of particular interest in relation to the highlights of science that we like to stress in this book is an attempt to create a proper tribute to the “father of chemistry”, Antoine Lavoisier. Situated prominently at the foot of the main staircase (the former entrance hall of the priory), the display contains both comprehensive educational placards and apparatus that he used in his research. Lavoisier was a crusader for quantitation and the instruments shown are truly impressive-there is nothing of the primitive here. Beautifully engineered beam balances and gasometers are especially striking. Also of interest are several calorimeters. They remind us that heat was considered an element by Lavoisier and by most scientists of his time and that Lavoisier collaborated with physicist Simon Laplace to measure its quantity and properties.

Finally there is a special treat – Foucault’s pendulum, suspended from the twelfth-century high vaulting of the priory church, its path of oscillation turning slowly hour by hour to mark the rotation of the earth beneath it. Foucault’s original pendulum was installed in the Pantheon in 1851, but popular demand led to the construction of several duplicates. The one in the museum was on display at the 1855 Universal Exposition in Paris.