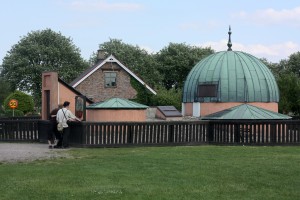 The island of Ven is an extraordinary place to visit. It is only about 3 miles (5 km) from end to end, with a resident population (in 1991) of 332, swelled on summer weekends, to be sure, by cycling and picnicking families from the mainland. But 400 years ago (when Ven belonged to Denmark), this little island was the scene of Europe’s most important scientific measurements. In the midst of its green fields and grazing sheep and cattle stood the observatory of Tycho Brahe, where the motions of the planets were observed with unprecedented accuracy. Brahe moved from Denmark to Prague near the end of his life and bequeathed his voluminous data to Johannes Kepler, who published them and used them as the basis for his famous three laws of planetary motion. And then Isaac Newton, partly egged on by Edmund Halley to explain Kepler’s laws, gave us his own laws of motion and the law of gravitation. Without King Christian’s gift of Ven to Tycho, would there have been no Kepler’s laws? Would Newton’s have been a more obscure career? Would Cartesian doctrines have prevailed longer than they did-ten years, twenty years, even more? Common sense tells us to avoid such hypothetical questions, but we can nevertheless imbibe a profound sense of history when we visit here. It was indeed a vital spot in the sequence of how physics actually developed.

Tycho Brahe erected his castle and observatory on the highest spot on the island, 150 feet (45 m) above sea level. He called it Uraniborg (meaning “heavenly castle”). It was by all accounts a showplace, built in Dutch Renaissance style and surrounded by a walled park, with a gate at each corner. All that we see today is a hole in the ground where the castle once stood; but pictures enable us to imagine how it must have looked. Tycho soon found the castle too small (and too unsteady) for his needs and built a separate observatory across the road, called Stjerneborg, meaning “castle of the stars.” It is a lot smaller than the name might lead one to expect; the secret of its success is that most of the structure-five circular crypts around a central warming shelter-was built underground to provide firm solid foundations for Brahe’s instruments. The idea was new in Europe at the time, which explains why Brahe’s data were so much more precise than anybody else’s even though everybody alike had to rely on observations with the naked eye. The observatory site was uncovered in 1951 and the superstructure (cupolas and towers) was restored to what is said to be similar to the original appearance.

The small Brahe Museum was established in 1930. It houses finds made during the excavations of the site and gives us pictures (but no models) of the precision instruments he built, together with a large amount of related historical information. We learn, for example, that Tycho Brahe had a sister named Sophie, who was married to an alchemist and was herself a proficient chemist. But her greatest fame was as an astrologer! She cast horoscopes on the basis of her brother’s planetary positions. (We are told that a new museum will be built soon, to open in 1993 or 1994.) Editor: The new Tycho Brahe museum opened in 2005.