By the 1850s Manchester’s central district was fully commercial. The Infirmary was remodelled, losing its sprawl of allied charities, gaining a portico and clock tower as a solid civic monument. On the streets around Piccadilly, the warehouses were becoming grander, now that the railways brought potential buyers to see the stock collected and elaborately displayed. One of the merchants, John Owens, was persuaded by another to leave his fortune to provide a college for young men. This was not to be a sectarian affair like that newly established by the Congregationalists; it was not to be tainted with the Unitarian heresy, like the Manchester New College, now back in its home city after 37 years in York. Owens College was to be like Oxford and Cambridge in what it taught. But it would be non-sectarian and non-residential. It was established in 1851 in the former house of Richard Cobden, merchant, liberal parliamentarian, anti-militarist and phrenologist.

It almost failed. Manchester fathers would go to occasional lectures, and they would turn out for a big fashionable event like the Art Shown of 1857; some of them reckoned their business might benefit through a short course on calico printing or some such; but they were not going to divert their sons into three years of university education. Owens College survived because it came to incorporate a more vigorous form of symbiosis between capital and culture, one learned from Scotland and especially from Germany. 1851, the year of the College’s opening, was also the year of the Great Exhibition in London. British industry was then supreme, but so was German science, and from Prince Albert downward there were educated men who feared that German success in science would lead to more powerful competition in industry. Their answer was to develop in Britain the system of advanced training and research which had been pioneered in German universities. In Manchester it was Henry Roscoe, Professor of Chemistry from 1857, who developed that vision, linking it to the practical concerns of local industrialists, but always insisting that no one could be a useful chemist until he had mastered the principles of the subject; you could not start with applications. That vision led to the largest and finest school of chemistry in Britain. When Owens College moved in 1873 to its present site on Oxford Road, Roscoe built a large chemical laboratory at the rear of the main building. It was Roscoe and his students who helped arrange for the University Charter of 1880, by which the Owens College became linked to newer colleges in Leeds and Liverpool as the Victoria University. 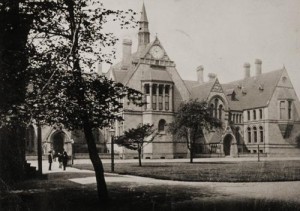 By then the local medical school had been brought into the College; its staff included notable ‘scientific clinicians’, such as Julius Dreschfield. Engineering classes, under Osborne Reynolds, were becoming established. Horace Lamb’s applied mathematics was to add further strengths. The Physics Department had a good reputation for teaching – several of its pupils, including J J Thomson and Arthur Schuster, had gone on to the new Cavendish Laboratories at Cambridge. In the natural historical sciences, the former Natural History Society’s Museum had been rehoused as part of the new College; its curator, W Boyd Dawkins, became Professor of Geology in 1874. Five years later, Arthur Milnes Marshall, the talented Cambridge embryologist, was given the chair of zoology. Williamson remained in the chair of botany until 1891. Like much of the work at Owens, his research was linked to the local community; he was the major British pioneer in the study of coal fossils.

The Mechanics’ Institute had developed in parallel with Owens. A new building was opened in 1856 in what is now Princess Street (it now houses the Labour History Archive). The occasion was marked with an international exhibition of Arts and Manufactures, but enrolments were disappointing, and from the 1870s the development of elementary education under the municipal School Boards robbed the Institute of some of its previous function. It was a night-school educated boot-maker, J H Reynolds, who rescued the Institution. Appointed its Secretary on 1879, he made it part of a growing national movement for technical education, linking it with the new City and Guilds Examination, and soliciting industrial support. As British manufacturers worried more and more about international competition, and as the elementary schools gave a basic education to more of the working classes, so the Technical School grew. By 1889 it was planning a new building and was to be part of a Whitworth Institute, together with the School of Art and a Whitworth Gallery; but new legislation and national funding became available, and the Technical School was taken over by the Council in 1892. A fine new building, of German inspiration was opened in 1901 (later the ‘UMIST main building’, which was extended in the 1950s). The ‘Tech’ was intended to teach science for industrial application; Owens would teach the professional men; there was an agreement to that effect from 1896. But as money and equipment poured into the new Tech, the boundaries became blurred.