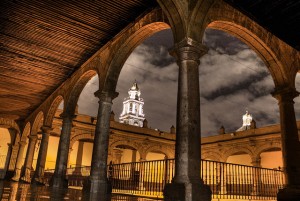 Palacio de la Escuela de Medicina (Palace of the School of Medicine) is located opposite the main square of Santo Domingo, and was built under the direction of Pedro Arrieta, who began the work on the December 5, 1732 and completed for 1736 Christmas.

The frame is adorned on both sides, with four columns and two pillars carved in stone granite, with capitals of composite order. Human face figures, reminiscent of the late Sixteenth century decorate the frieze.

The cover art, with an eight-side top, it is an example of Eighteenth century Baroque Hispanic art, provides a framework for the door, on two sheets of thick boards covered and trimmed with sturdy nails. 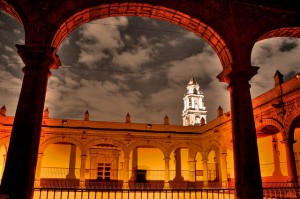 At the second level are repeated details of the ground floor, including the eight-side arch, except the columns replaced by pilasters; the balcony railing is Biscay iron.

On the upper level, the top was used to display the emblem of the Holy Office. From the crest on either side, there are rows of battlements that give the impression of solemnity to the building.

The large patio is a perfect square, and in every angle the builder makes the arches of the angles remain with nothing resembling the hold. This is the keystone extended to below under “pendatif”, as some descriptions, or “adaraja” as the old Moor builders from Spain used to call it.

This beautiful monument of classical art-model of the past century-styled by Manuel Villar and his disciple Soriano, was presented by the Academia de Bellas Artes de San Carlos (Academy of Arts of San Carlos) to the School of Medicine and solemnly inaugurated in the year 1860. 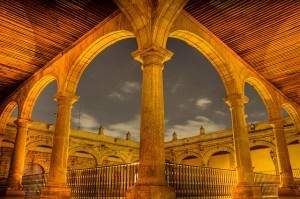 Incidentally, the old building of the Inquisition, included not only this house, but also next door, 35 Avenue Brazil, before a number of Third Street in Santo Domingo, acquired in 1915 for the School of Medicine by Dr. Don Angel Hidalgo. Farther north, the buildings where the garages were the inquisitors, the first street in Colombia, for centuries called “street parking” in what is now Venezuela Street, were perpetual prisons , so that the street was called until 1916, Street of Perpetuity.

On June 8, 1813 was closed in Mexico the Holy Office under the decree of the Spanish Courts, since on February 22 on the same year was disappeared on Spain. However, Ferdinand VII, he was restored January 21, 1814 until it was finally abolished on 31 May 1820.

After several uses like Military College, National Lottery, Lancaster school and state government offices, in 1854 was acquired by Mr. Urbano Fonseca, inspector of public instruction for the School of Medicine.