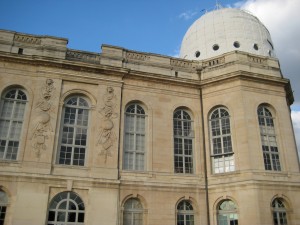 The Paris observatory dates back to the ambitious days of Louis XIV and his chief minister Colbert. It was completed in 1672; its four walls are oriented precisely to the four points of the compass; the southern wall defines the nominal latitude of the city and a perpendicular line through the center of the building defines the “Paris meridian.” The actual numerical coordinates, relative to other places on earth, were established with the aid of the Danish astronomer Ole Remer, brought here by Colbert because he had inherited the mantle of Danish expertise that had been established a century earlier by Tycho Brahe. Remer remained in Paris for several years and it was here that he accomplished his main scientific achievement, the measurement of the speed of propagation of light, in 1676~ The event is marked by one of the official city plaques placed on the observatory wall. Christiaan Huygens from the Netherlands was here for several years in the same period and was the first to see the rings about the planet Saturn.

In front of the observatory entrance is a statue of the French astronomer LeVerrier, effectively the discoverer of Neptune, the eighth planet of the solar system. The seventh planet, Uranus, had first been sighted by William Herschel in England in 1781, but irregularities in its orbital motion suggested the existence of a more distant planet beyond. LeVerrier in 1846 predicted its orbit on the basis of mathematical calculations and the prediction, of course, included its “present” location. A German observer O. C. Galle) found it where predicted on the very next day-the instruments at the Paris observatory lacked the requisite precision. (This was probably the first discovery of an object in sky on the basis of calculation, which has now become commonplace.)