A fairy in the garden

It is almost impossible to conjecture when science began in fairyland, but we can be sure it was once upon a time.

Serious attempts to map the terrain were made from the nineteenth century, when the scientific discipline of fairyology first started to receive sustained academic attention. Works such as Michael A. Denham’s A Few Fragments of Fairyology, Shewing Its Connection with Natural History (1859) demonstrated the correlation between natural historical objects and those from the fairy realm: fossil sea-urchins and ‘fairy heads’, fungi and fairy rings, or cattle-disease and ‘elf shots’. Key geographic landmarks were also determined, including ‘fairy caves’, ‘coves’, ‘holes’, and ‘parlours’; not to mention the basaltic monuments of the Giant’s Causeway, and Fingal’s Cave. Peoples from all over the world were classified according to a euhemeristic fairytale scale, identified with legendary tribes and disappeared miniature or gigantic races. And the folklore of regions and nations was collated and synthesized, leading to such pioneering works in linguistics as Snow White, Cinderella, and Sleeping Beauty. 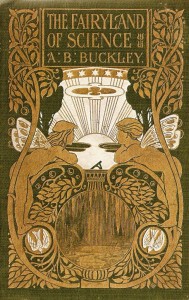 Front cover of "The Fairyland of Science" by Arabella F. Buckley (1879)

By 1879, Arabella Buckley’s Fairyland of Science went beyond topology, taxonomy and re-telling, to uncover the mysteries of this under-researched scientific location. Fairies, she showed, were really forces called ‘crystallisation’ and ‘cohesion’. Gravity was a ‘great invisible giant’, and lumps of coal buried ‘gnomes’ freed by miners. She also gave useful directions for those visiting the realm for the first time: where other authors had recommended travelling through rabbit-holes and looking-glasses, Buckley claimed the simplest mode of transportation was best. ‘How are you to enter the fairyland of science?’ she asked her reader. ‘There is but one way. Like the knight or peasant in the fairy tales, you must open your eyes.’ With the right perspective, ‘anything, everything’, from fire and water to flowers and flies could ‘reveal to us nature’s fairies’. Fairyland was not ‘some distant country’: it was all around, and her readers were in many ways already there.

At other times, travelling around fairyland has been shown to be remarkably easy: however, rather than riding the magic carpets of the Arabian Nights, harnessing the magical power of electricity has been the preferred means of scientific navigation. The Children’s Fairy Geography [ca. 1879], for instance, employed many newfangled technologies (or ‘Edisonian notions’) to take a trip around Europe. The ‘Electric Boots’ were self-confessedly ‘medium-paced’, but could still go up to a remarkable 15 miles an hour; the ‘Chilly-warmer’ and its ‘chemical preparation’ could be used to warm the chilly, chill the warm, and even make a cup of tea. Telegraphic communication could beat Puck in a race around the globe; and the railway train would travel faster than any fabled shoes of swiftness. By the early twentieth century, the fairytale hero of The Master Key could travel, eat, attack and defend, record and judge character, through the gifts of the ‘Demon’ of electricity (conjured in a manner akin to Aladdin’s genie, through the rubbing of the eponymous ‘key’). As its preface declared, its story soon ‘may not seem … like a fairy tale at all’.

Guides to science in fairyland have appeared in varied guises, from insect characters attending entomological events such as the ‘Butterfly’s Ball’, to A.L.O.E.’s miniaturised grasshopper lecturer Fairy Know-a-Bit, bedecked in tiny cap and gown (and even tinier spectacles). For Know-a-Bit, the scientific takeover of fairyland was characteristic of the industrial age; as he claimed: ‘Times have changed – and so have I. A railway now runs right through the valley which was our favourite haunt – there are engine-lights instead of the glow-worm’s, and the scream of the whistle drowns the song of the bird! Education is now all the fashion, and fairies, like bigger people, are sent to learn lessons at school.’ J.G. Wood’s preface to an updated edition of Episodes of Insect Life by ‘Acheta Domestica’ [L.M. Budgen] published in 1867 emphasised how close the relationship was between these creepy-crawly characters and the objects of scientific investigation: ‘most of the drawings must be examined, as the insect itself must be viewed, with the aid of a magnifying glass; and not until this is done, will the singular truthfulness of their execution be seen’.

Overall, it is clear that a tour through science in fairyland teaches us one important lesson: that truth is stranger than fiction. The Victorian synthetic chemists were superior modern alchemists; the worlds revealed in the reflecting telescope more strange that the visions of the magic mirror; grisly lizard-like monsters wrestling in primordial ooze more dangerous than dragons. The real history of the world, transformations of matter, and powers of the universe, were far better than any fantastical imaginings. As Charles Kingsley declared in his evolutionary fairy tale, Water Babies, ‘fairy Science’ provided the best stories, and was ‘likely to be queen of all the fairies for many a year to come’. However, he cautioned his readers at the conclusion to his tale about how seriously they should take the fairyland of science, with a warning about what they had just read; ‘remember always… this is all a fairy tale, and only fun and pretence: and, therefore, you are not to believe a word of it, even if it is true’.