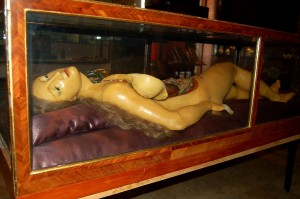 The museum to commemorate Ignaz Semmelweiss – in the house in which he was born – is in Buda at 1 Aprod Street. It is actually an excellent general medical history museum with only a little space devoted to Semmelweiss himself. It goes back to early man, the Egyptians, the Greeks, and then, more broadly, from medieval to relatively modem Europe. A fine collection of early surgical and obstetrical instruments is especially noteworthy, and there is a reconstructed pharmacy with lovely porcelain jars and bottles.

The room devoted to Semmelweiss memorabilia contains his desk, portraits of the family, and so forth. One cabinet has a copy of his book and open letters he published to refute his detractors. There is an interesting copy of a German textbook that Semmelweiss used as a student in Vienna in which his notes are written in Magyar-more testimony to the fact that he was Hungarian, not German. Semmelweiss’s remains are interred in the courtyard of the house and their history reflects the slow appreciation of the man’s worth. He died in Vienna in 1865 and was originally buried there. Thirty years later his bones were transferred to Budapest’s honour cemetery; finally, in 1965, they were moved here to the house where he was born and is remembered.

Another monument to Semmelweiss is a statue of the good doctor, with a mother and babies sitting at his feet, placed in front of the old St. Roch Hospital in Pest, which is where he practised medicine. This used to be the site of isolation barracks in the old days because it was outside the city. There is a pretty little church (St. Roch Chapel) next door.