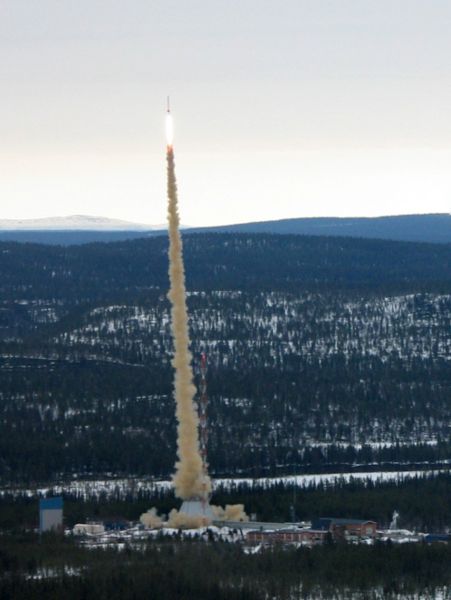 Kiruna is a municipality and population centre the far north of Sweden known mostly for the large iron ore mine, the traditional Saami culture and the sublime nature, but also for the recent space physics research and space technology, and it is even referred to as ”Space Town Kiruna” by officials, media and the public.

Because Kiruna is situated in the auroral zone (aurora borealis or northern lights), it is an ideal location for doing scientific studies of the aurora. The first research station was established in the early 1900s by the lake Vassijaure close to the Norwegian border west of Kiruna. The building soon burned down and the scientific activities were later moved to a building in Abisko, further east along the railway line. Here, the activities continued into the 1940s, when it was decided that a new research station was needed. However, Abisko is still today a natural research station, with a focus on arctic science in general.

Kiruna Geophysical Observatory was established in 1957, about 8 km east of Kiruna town centre, by the E10 road close to the airport. KGO has been in operation ever since (auroral measurements actually started in 1948 at the same place). KGO has expanded and changed name to the Institute for Space Physics, also known as Kiruna Space Campus, as they are also doing teaching at university level. The institute is open for visitors. They have a restaurant and a little shop in the reception where you can buy souvenirs. You can reach it by bus from Kiruna town, alternatively rent a car or a bicycle.

In 1966, the Esrange sounding rocket range was inaugurated about 45 km east of Kiruna. Esrange is a service facility where scientists and engineers can go to perform experiments with rockets and balloons, or do satellite communications. There is a hotel there. Esrange is civilian and mostly open for the public, but a large part of the area is off limits when they do rocket launches, and an area around near the launch site is permanently fenced.

The rocket impact field is very large (5,600 sq. km) and covers the entire north of Kiruna municipality to the Norwegian and Finnish borders. You should not go there unless you are certain there is no rocket launch going on, but there are 19 security shelters scattered around the field where people can go to be protected in case there is a rocket launch going on. The area is not inhabited but the Saami people use it for their reindeer husbandry, and hunters and fishers are sometimes in the area. There are almost no roads there, but the area can be reached via the E10 and E45 roads.

One of the security shelters at Esrange, by Gerrit. Image licenced under Creative Commons Attribution-Share Alike 3.0 Unported license.

The main site of Esrange can only be reached via the E10 road, and the road to the north-east via Jukkasjärvi. It is a bit complicated to get there, because there are no public transports, so either you must rent a car or go by taxi, alternatively if you are lucky you can book a bus ride with Kiruna’s tourist information, but they only drive if there is a minimum amount of travellers. I recommend that you also phone Esrange in advance to make sure they can receive you. They have a small museum and a souvenir shop, but you must book in advance to get entrance and be guided there.

There are also other facilities in the “space town”. Some are easy to reach but others are more hidden. Scattered around in the municipality (and outside) are a number of radar antennas and large parabolic antennas. The large EISCAT dish is clearly visible from the E10 main road. The ALIS auroral imaging system consists of a number of sites around Kiruna and neighbouring municipalities.

If you want to see the northern lights, Kiruna is an ideal place but keep in mind that the aurora can only be seen during the dark nights, and Kiruna has very bright summer nights (because of the midnight sun) so you must go there in the autumn, winter or spring if you want to see the aurora. In Abisko, you can find the Aurora Sky Station but the auroras can be seen from anywhere, depending on the weather and the solar magnetic activities.

Of related interest to historians of science and technology are also Kronogård and Nausta in Jokkmokk municipality. This is where the first rocket launch was done in 1961, with further experiments until 1964. Be warned that this is close to a military missile test range and sneaking around in the forest with a camera may not be a good idea. You don’t need to worry about this in Kiruna (other than falling rocket debris).

Fredrick Backman, Making Place for Space : A history of “Space Town” Kiruna 1943-2000. Dissertation in History of Science and Ideas at Umeå University, Sweden, (2015).