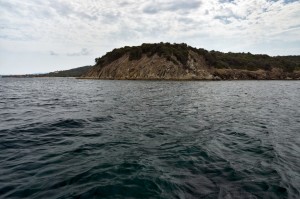 The Halkadiki Peninsula lies in Macedonia, the northeastern portion of Greece and one of the most attractive parts of the country. The peninsula is studded with small fishing villages along the coast, and inland are thickly wooded hills, high mountain passes, and magnificent views. Three long narrow fingers jut out into the Aegean Sea and on one of them stands Mount Athos, 6,500 feet (2,000 m) high, the center of an incredible medieval relic, a monastic community utterly cut off from the world. Women, children, and eunuchs are  forbidden; no roads enter. Male tourists are admitted, gaining access by boat from Ouranoupolis; a beard as proof of maleness is desirable, but no longer the absolute requirement that it used to be.

If you venture to this remote part of Greece, you will find yourself close to Stagira (or Stayira), the place where, in 384 B.C., the great Aristotle was born. The present town of that name, on the road from the coast inland to Arnea, has named a large park and picnic area after Aristotle, with a prominent (modern) White stone statue of the philosopher himself. However, the actual birthplace is not the present town but ancient Stagira, which was perched on high bluffs at the edge of the open sea, about 10 miles (15 km) away, just south of the present vi age of Olimbiada. There are signposts everywhere, beginning on the main coastal highway from Stavros toward Mount Athos, so that the site and the excavati cannot be missed.

It is, of course, a long way to come and the ruins per se are less rewarding he many other archaeological sites. But can we really pass it by? Can we fail to moved at least a little by being on the very piece of land that nurtured the man whose thoughts and writings dominated Western academic institutions for so many centuries after he was dead?

In England the association of man with place has always been strong. Aristotle was no exception, as we can see from the following lines of John Dryden-poet and dramatist, but elected to the company of scientists, the fledgling Royal Society, in 1663:

The longest Tyrrany that ever sway’d
Was that wherein our Ancestors betray’d
Their free-born Reason to the Stagirite
And made his Torch their Universal Night.

The exultation he felt over what he saw as the then emerging downfall of Aristotelian dogma comes through loud and clear.