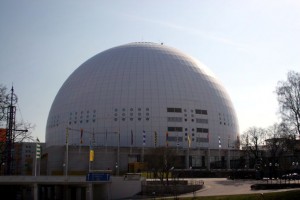 Sweden: land of high taxes, origin of Volvo and the epicentre from whence Abba spread. Also, the home of the Solar System.

It is actually the World’s largest, permanently exhibited, scale model of the Solar System, and growing. Perhaps due to its more trivial standpoint in terms of science engagement, and not to mentioned geographical locations, it is little known outside Sweden.

Plasma physicist Nils Brenning and astronomer Gösta Gahm are the founders and co-ordinator of the Sweden Solar System (SSS) project, with the aim of linking the project to each of the local “stations” that feature a planet, satellite or other celestial body. At a scale of 1:20 million, the model may sound small, but the distances between each “station” further emphasises the vastness of the real thing. The Sun is represented by the Ericsson Globe in Stockholm, a well known sports arena and concert venue, famous for its likeness to a golfball; including the “corona”, it measures 110 metres in diameter. The Earth (65 cm in diameter), complete with Moon (18 cm in diameter) but no other satellites, sit in Stockholm’s Natural History museum, 7.6 km North-North-West of the Globe. True to life, the two objects are kept in different permanent exhibitions to maintain the correct scale. The museum also houses Stockholm’s other hemi-spherical roof (the first one being the Globe), or rather ceiling: that of Cosmonova, a near-360 degree-vision IMAX planetarium. 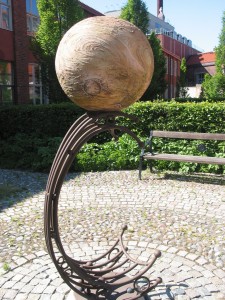 So far, all eight official planets and dwarf-planet Pluto are in place, at distances from 2.9 km (Mercury) to 300 km (Pluto) from the Globe Northwards. Not limiting themselves to metallic spheres, Jupiter is presently a flower arrangement on a roundabout island outside Arlanda airport; Neptune is an acrylic sphere that shines with the planet’s iconic blue light at night. Comets like Halley and Swift-Tuttle have also been introduced to the system, though South-West of the Globe; foundations have been built for a representation of Termination Shock, the edge of the heliosphere, at the Institute of Space Physics in Kiruna, some 950 km North of the Globe, above the Arctic Circle.

Of course, most tourists do not have the time to fling up and down the coast of the Baltic Sea looking for a lot of small, round things, so it is fortunate that most of this Solar System can be found close to Stockholm.