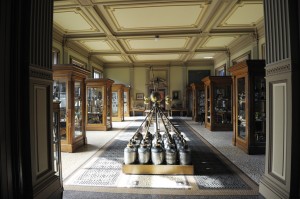 Haarlem is in the heart of the Dutch bulb centre, and each spring the road from Haarlem to Leiden affords an incredible multi-coloured spectacle, unequalled anywhere in the world. The city itself has a history going back to the Middle Ages and counts Frans Hals and other artists among its former citizens. Its interest for our purposes lies in the Teylers Museum, the oldest museum in the Netherlands (founded 1778), dedicated by its founder to serve both science and the arts. Today the museum can hardly be classed as among the most distinguished institutions of its kind, but it has a certain charm and happens to be a good place to focus on two highlights in the history of science, one ancient and one very modem.

The museum’s first director, Martinus von Marum, was an indiscriminate collector, and the museum’s contents still retain their original haphazard character, including dinosaur skeletons, minerals of all kinds, old telescopes, and ancient air pumps. There is a battery of early Leyden jars and a friction generator for charging them, but little in the way of explanation to indicate how they work. One of the telescopes is a lovely wooden one, built by the Herschels in England.

One unique exhibit, typical of what an indiscriminate collector might acquire, is a skeleton of the famous Homo diluvii testis, a supposedly human witness of the biblical deluge. It illustrates one of the more bizarre episodes in the history of paleontology, promoted by an avid fossil collector, Johann Jacob Scheuchzer (1672-1733). Scheuchzer was obsessed with the search for remains of the miserable sinners who perished in Noah’s Flood and eventually actually believed that he had found human skeletons to fill the bill in a quarry on the German side of the Rhine, near Schaffhausen. The quarry men there, aware of his passion, obliged Scheuchzer with a steady supply of the skeletons over the next several years. Scheuchzer enthusiastically broadcast his discovery far and wide, with the warning “Take Heed!” as a preface to his tract. He might have applied this warning to himself, for one of his friends raised a valid objection to his sermonizing, namely that the skeletal vertebrae in his specimens lacked a canal for passage of the spinal cord and therefore could hardly be mammalian, much less human. But Scheuchzer was too full of enthusiasm to listen and at least part of the outside world agreed, for Homo diluvii testis became an accepted textbook item.

It was not until 1825 that the record was set straight: France’s Georges Cuvier came to Haarlem to examine the specimen there, and pronounced it to be the remains of a large salamander. It was then noted that all the specimens that Scheuchzer had obtained from the obliging German quarry men contained only the top half of the skeletons-the bottom half, which would have included a long tail, was invariably missing. The visitor will also note that the tailless skeletons are not much more than half a meter long, and it is not easy to understand today how anyone could ever have imagined them to be the remains of human beings, even without the problem of the spinal cord canal. (The skeleton is in Showcase 29 on the main floor. Several samples are provided, together with a Swiss stamp that pictures an uncut giant salamander skeleton, complete with tail.)

In a more recent period, Hendrick Antoon Lorentz was curator of the Teylers Museum for 16 years, a curious choice, given that he was a theoretical physicist. It appears that his teaching duties at the University of Leiden were becoming increasingly burdensome to him (he had been there for 30 years) and the curatorship was made available to him in 1912 to give him more time for his research. (Should we have invited a comment from a typically harried director of a present-day museum?) There is a portrait of Lorentz just by the entrance to the old Teyler library in the museum. His books and notes are kept here and are available for scholars who might need them.