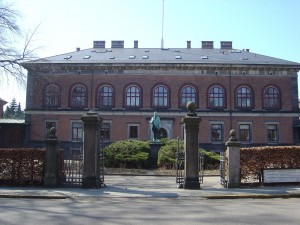 The historic laboratory, built in 1897 and the principal place of research until 1976, is at 10 Gamle (“old”) Carlsbergvej. It is still in active operation, joined by a covered passageway to the modern research center next door. Neither building is normally open to the general public and a bell must be rung to gain admission to the old building. Inside it there is an impressive staircase rising from the entrance hall, with flanking busts of Louis Pasteur and the German chemist Justus von Liebig. Pasteur paid a visit to the laboratory in 1884.

The Carlsberg Brewery is open to the public. Its entrance is on Nv (“new”) Carlsbergvej, around the corner from the research center; the portal is framed by massive granite elephants, which actually support a cooling tower. Guided tours take the visitor through all parts of the brewery and provide him with a taste of the Carlsberg product. The very earliest research laboratory (1876-1897) was a part of the main brewery complex. It is now a museum and is visited as part of the guided tour.

The house in which the brewery founder J. C. Jacobsen resided (built in 1876) is on the brewery grounds, separated only by tall trees and gardens from the railway tracks on one side and the main brewery buildings on the other. It is now the “Mansion of Honor,” given as a lifelong residence to a distinguished Danish scholar. Scientists and humanists alternate as occupants. The most celebrated occupant was Niels Bohr, who lived in the house (except for his brief wartime absence) from 1932 until his death in 1962.

By Charles Tanford & Jacqueline Reynolds Ole Remer was born in Arhus (in Jutland), where a street is named after him,