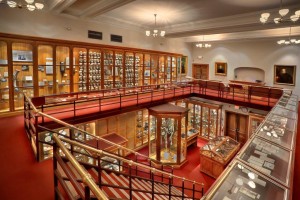 A view of the main Museum Gallery. Photograph credit: George Widman, 2009, for the Mütter Museum of The College of Physicians of Philadelphia

Adorning the century-old Beaux Arts College of Physicians of Philadelphia is a large banner advertising the Mütter Museum as a “disturbingly informative” place. This prestigious historical building — now a national landmark as “the Birthplace of American Medicine” — embodies the historical medical legacy of Philadelphia and its numerous firsts: first medical school, first hospital, first school of optometry, first medical college for women, first school of pharmacy, first children’s hospital, first hospital dedicated to the eye, and more. The College hosts two collections, the Historical Medical Library and the Mütter Museum, the latter having become a cultural landmark for an audience that extends well beyond the medical cognoscenti.

The College has grown with the nation. Founded in 1787 by physicians including a signer of the Declaration of Independence, Benjamin Rush, MD, the College aimed to raise the competence and standing of physicians and to relieve human suffering. The fellows, accomplished physicians who are elected to fellowship by their peers, remain at the core of the College and now number over 1400. One fellow, Thomas Dent Mütter, MD, a popular lecturer and successful physician in private practice, donated a pathological anatomy collection that opened as the namesake museum in 1863. Although the museum’s collections have been used for teaching and research throughout the museum’s history, public visitors began arrive in ever-increasing numbers from the early 1980s and now over 130,000 come yearly. At the museum people see what they cannot see elsewhere: they can explore intimately and viscerally what it means to be human.

Less conspicuous to casual visitors, the Historical Medical Library has been known internationally as one of the largest history-of-medicine collections in the United States with over 325,000 volumes including monographs, journals, manuscripts, archives, prints and photographs, pamphlets and incunabula (books printed before 1501). The library functioned as Philadelphia’s central medical library from the 1850s to the 1970s, serving its medical schools, hospitals, physicians, and other health professionals. Now, the library is conducting strategic planning to reinvent itself as a 21st-century special collections library. Administratively, the College is combining library and museum collections to elicit wider research interest and to use all collections for exhibits, web-based projects, and other initiatives. Most important, the library participates as an active member of the Medical Heritage Library, a digital consortium of east-coast libraries with substantial medical history collections (see: http://www.medicalheritage.org/).

To reckon with the new reality of electronic access and research, the Historical Medical Library has embraced the “humanities” epithet to recognize its interest in courting new audiences and to situate itself within a broader intellectual territory. Even the “Historical Medical” moniker is a re-invention to reflect a changing status. Informally, we describe the library and museum collections jointly as the Center for Medical Humanities. Our web-based outreach speaks to this humanities approach: the College collections inform our award-winning History of Vaccines website and our popular YouTube programs, What’s on the Curator’s Desk, the Mütter Minute, and No Bones about It (see: http://www.collphyphil.org/Site/mutter_museum.html). History of Vaccines speaks to the manner in which the College aims to use medical history to inform public health. In effect, the College has created its own television channel with social media and web-based programs. Additionally, happenings at the Mütter Museum and Historical Medical Library are followed through Twitter, Facebook, and Flickr. 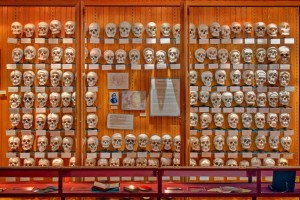 The Hyrtl Skull wall. Photograph credit: George Widman, 2009, for the Mütter Museum of The College of Physicians of Philadelphia.

The museum, on the other hand, contains about 25,000 specimens and artifacts with well-defined collecting foci; approximately 12% of the collection is on display. An unusual institutional survivor, the museum features its displays in 19th century vitrines and cabinets, contributing to an ambiance that visitors find attractive. To some degree, then, the Mütter is a museum of itself although its collections remain vital for historic and scientific research. The permanent exhibit contains specimens that many people return to visit as old acquaintances. The tallest skeleton in North America (7’6″) stands alongside Mary Ashberry, an achondroplastic dwarf; the conjoined livers of the original Siamese twins, Chang and Eng Bunker, reside underneath a plaster cast of the twins, produced post-autopsy; and a display on the assassination of Abraham Lincoln includes tissue removed from assassin John Wilkes Booth. Over a hundred skulls of the Hyrtl Skull Collection face the viewer, and on each skull anatomist Josef Hyrtl, MD wrote the data of scientific interest in the 1850s: name, occupation, cause of death, age, birthplace, and religion, data constituting brief and poignant life histories. Facing a collection of teratology (“monstrous births”), the tools of pioneer bronchoesophagologist Chevalier Jackson surmount drawers and drawers of swallowed objects recovered without surgery, hundreds of specimens that enthrall many visitors as unusual medical curiosities. In a corner nearby stands the skeleton of Harry Eastlack, the only complete skeleton on display in North America that shows his disease, fibrodisplasia ossificans progressiva, a rare disease in which the connective tissue ossifies, eventually suffocating the victim. Although a rare phenomenon, the key to understanding this disease is the key to understanding bone growth. The Mütter American Giant. Photograph credit: George Widman, 2009, for the Mütter Museum of The College of Physicians of Philadelphia.

Exhibits and collections as rich and varied as these specimens attract researchers. Recently, a Canadian team removed samples of 19th century cholera tissues in a search for viable cholera DNA. The research aims to map cholera epidemics world-wide over two centuries and to date no pickled 19th century specimen has yielded viable DNA—until now. One sample produced the sought result. The Hyrtl skulls have always attracted researchers: following the end of civil war in former Yugoslavia, war crimes investigators studied Croat skulls in the collection to help identify anonymous victims of mass murder. Some recent exhibits have highlighted public health challenges. In response to a (funded) request from the City of Philadelphia to complement its public health program to reduce lead poisoning, the museum created The Devouring Element: Lead’s Impact on Health which featured library and museum collections to explore our love-hate relationship with lead since antiquity.

In 2013, the 150th anniversary both of the Battle of Gettysburg and the Mütter Museum, the College will open a permanent exhibit on the medical dimension of the war, Broken Bodies, Suffering Spirits: Injury, Death, and Healing in Civil War Philadelphia. The exhibit will focus on the body, affording an intimate look at a white soldier, black soldier, and white female nurse. It asks visitors to consider the health of the soldiers and nurse, expectations for health care and mortality, and their relationship to physicians. The exhibit argues that during the war, injury, recovery, and death were managed in new ways and the war changed soldiers’ relationships with their own minds and bodies.

The College has developed a close relationship with the visual arts, most recently by commissioning internationally-renowned film artists, the Quay Brothers, whose meditation on the collections resulted in the film, Through the Weeping Glass: On the Consolations of Life Everlasting (Limbos and Afterbreezes from the Mütter Museum), funded by the Philadelphia Exhibits Initiative of the Pew Center for Arts and Heritage. More information can be found here: http://www.pcah.us/the-center/newsroom/center-spotlight-september-2011/. The Museum of Modern Art curated a small exhibit on the making of the film, now on view at the College, and the film is shown throughout the day.

Our resources related to the history of science are abundant, even if a little disturbing. We invite visits or communications from historians of science. We also have a small travel grant program available to researchers: http://www.collphyphil.org/Site/travelgrants.html. Contact the Director, Dr Robert Hicks, at [email protected].