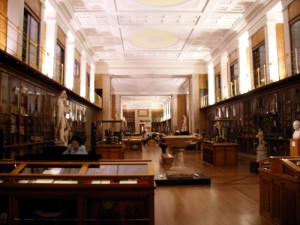 The Enlightenment Gallery at the British Museum in London (founded in 1753), represents an eighteenth-century cabinet of curiosity. It is home to a large collection of curious objects, thanks to the Museum’s founder, Sir Hans Sloane (an Irish physician, natural philosopher and collector), whose bust stands proudly just inside one of the entrances of the Gallery. By the time of his death, he had collected 71,000 objects that were donated to the State and left for the public to enjoy, many of which can be found in The King’s Library.

As you walk through the permanent exhibition in the oldest room of the Museum, The King’s Library (constructed during 1823-1827, and formed by King George III), it is possible to imagine British explorers returning from far off lands with curious treasures to stimulate and titillate scientific minds. The time period it reflects is the Age of Reason (also known as the Enlightenment), a period of learning around 1680 to 1820, within which intellectuals sought to promote reason and advance knowledge in society. Philosophers such as Isaac Newton, Voltaire and Benjamin Franklin were just a few of the big proponents of this cultural movement. This room demonstrates how British and European collectors, antiquaries and explorers, attempted to make sense of and classify their world at this time, using objects rather than texts. This was an important change in the way scholars investigated the natural world. The reliability of the written word was questioned during this period and so the study of objects and the collection and classification of specimens, along with the use of experimentation in science, became paramount to obtaining the truth about nature. 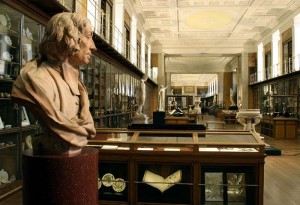 The Enlightenment Gallery boasts a variety of weird and wonderful objects to be admired, from natural to artificial rarities, from the beautiful to the bizarre. Several pointed flint hand axes, a wooden shoe, birds of paradise, fish skin gauntlets and the skull and crown of the Deal warrior, are just a few of the items that can be found amongst the thousands of objects on display. The collection also includes Sir Hans Sloane’s very own specimen tray: small compartments that contain botanical remedies ranging from a ground mummy’s finger (believed to cure bruises), a rhinoceros horn (used as an antidote for poison), and even hot chocolate (believed to help stomach problems). The King’s Library also possesses around sixty-thousand royal books. The broad spectrum of objects signifies Sloane’s and other collectors growing interest with natural philosophy in the eighteenth-century, and their growing desire to visualise and present their findings in an attempt to make knowledge about the natural world.

The Gallery is presented in seven sections, depicting the different aspects of eighteenth-century disciplines: religion and ritual, trade and discovery, the birth of archaeology, art history, classification, the decipherment of ancient scripts and natural history. 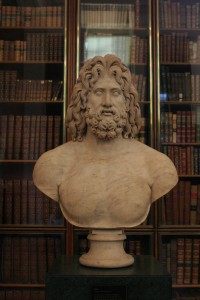 The beautiful archaic setting and architecture of the room creates a sense of time-travel: The King’s Library provides a dramatic contrast to the modern feel of the rest of the building, with its rich oak and mahogany floors and classical architectural features. Unlike modern museums there are no small, neat, tidy descriptions provided next to the objects in question, this adds to the charm and mystery of the Enlightenment Gallery. You can let your curiosity and imagination create explanations behind these wonders, which at a glance, appear to have no rhyme or reason; try to experience how collectors would have viewed objects that they had never observed before, and attempt to classify them.

Here, within the British Museum, it is possible to catch a small glimpse of the eighteenth-century scientific process of making knowledge; which involved observation and classification, elements of society that are arguably often taken for granted today. As a historian, I am wary to say that it is an absolute replica of a cabinet of curiosity, as this would be a hard challenge to achieve. However, to explore the objects that eighteenth-century contemporaries deemed worthy of study, and the way the Gallery deviates from modern expectations of a museum, creates the nearest possible experience to a cabinet of curiosity (the only other option is to create your own time machine!). As a result the Gallery has managed to capture a sense of mystery, imagination, knowledge and charm in a compact yet extra-ordinary room. Highly recommended.