Benjamin Franklin, inventor, scientist, and statesman, lived in Philadelphia from 1723 until his death in 1790 (aside from multiyear stays in London and Paris). His contributions to the study of electricity capped an impressive career dedicated to public service. In Philadelphia numerous places and institutions carry his name. The Franklin Institute, funded in part through funds set aside from Franklin’s will, is one of many sites honouring Franklin in the city. 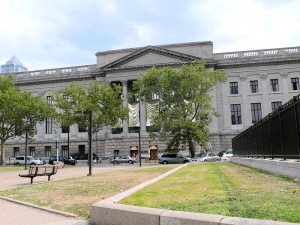 With a spacious rotunda designed by noted architect John Torrey Windrim and modelled after the Pantheon in Rome, the Memorial serves as the Institute’s main entrance. It is the only section of the Institute building that is free to the public; the science museum has an entrance fee. In the center of the Memorial is a six-metre high statue of Franklin, sculpted by James Earle Fraser. Beyond the Memorial is the science museum, which features numerous exhibits including a 26-metre Foucault pendulum, and a large steam train built in 1926. Outside the museum building is a Grumman Lunar Module, built for the Apollo program.

Another Philadelphia museum dedicated to Franklin is Franklin Court, the site of his former home and print shop, located near the corner of Market Street (Philadelphia’s high street) and Third Street. Although the original building had been demolished, in 1976, during the bicentennial of American independence, the ruins of the house’s cellar and foundations were excavated, and new structures were built to offer a sense of how it looked. An underground museum, free to the public, showcases Franklin’s achievements. 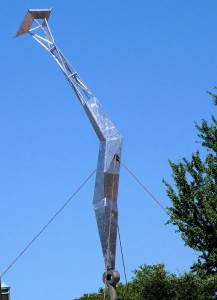 Several streets away from Franklin Court are other notable sites related to Franklin. Franklin’s grave is located in Christ Church cemetery near the corner of Fifth Street and Arch Street. It is a tradition to toss pennies on his grave marker for good luck. At Fifth and Vine Street is the entrance to the Benjamin Franklin Bridge. Within its entrance plaza stands a metal sculpture commemorating Franklin’s reported ‘kite and key’ electrical experiment. Designed by Japanese-American artist Isamu Noguchi to depict a kite and a lightning bolt, it is called Bolt of Lightning and was erected in 1984. 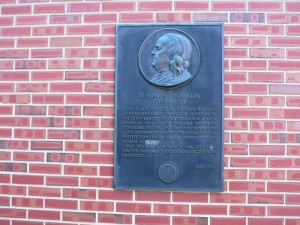 Franklin Wall Plaque at the corner of Fourth and Arch Streets, Philadelphia

Franklin was the founder of many organisations and scholarly institutions, including the American Philosophical Society and the University of Pennsylvania. The original site of the latter, the corner of Fourth and Arch Streets, is commemorated by a wall plaque.

The current site of the University of Pennsylvania is in the western part of Philadelphia. There stands yet another Franklin memorial, a bronze statue of a seated Franklin created by John J. Boyle in 1899. 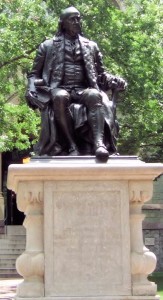 Bronze statue of a seated Franklin created by John J. Boyle in 1899.