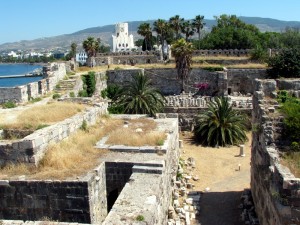 The island of Kos was the home of the famous physician, Hippocrates. It is a popular area  because of its mild climate and sandy beaches, but has been badly scarred by intemperate eagerness to cater to mass tourism. Roads, hotels, and discos spring up without much regard for how they affect their environment.

After the death of Hippocrates (around 360 B.C.), a temple/sanitarium was built on Kos, dedicated to the god of healing, Asklepios. People came from all over the Mediterranean to seek help by prayer or to be treated by Hippocratic doctors. They continued to come for nearly a thousand years, until a terrible earthquake and subsequent ravages by the Saracens all but destroyed the place. The remains have been excavated and some columns have been re-erected, to create an impressive memorial from which we can get a good picture of what it must have been like in its heyday.

The Asklepieion, as the temple is called, lies in open country on a limestone fold of a hill and is remarkable for its spacious design-three terraces, one above the other, joined by broad stone staircases. Patients were presumably treated by physicians on the lowest level, in “shops” lining a large, open rectangular space. They then went on to pray to their gods on the middle and topmost levels. The remains there reflect the continuity of use. The most prominent group of columns, for example, seven in number on the middle level dates from Roman times, outlining a temple dedicated to Apollo; two thicker Ionic columns on the same level are much earlier. We know from the writer Strabo (who lived in the age of Augustus) that all the temples were filled With artistic treasures, many brought as offerings by the patients themselves. And it is interesting that tributes to Hippocrates continue to this day. The ceremony of the Hippocratic oath is sometimes held here. An International Hippocratic Foundation is housed in modern buildings adjacent to the archaeological area. It serves as a center for professional congresses.

The city of Kos itself has an archaeological museum with a statue of Hippocrates and a mosaic from the second or third century A.D. depicting the physician welcoming the god Asklepios. There is also the so-called Plane Tree of Hippocrates standing next to the medieval fortress overlooking the city’s harbor. According to legend, the physician taught and wrote in the shade of this tree, whose outer shell is now more than 30 feet in diameter. Lawrence Durrell once visited this place: “I slept under the tree for two nights,” he wrote, “hoping that the spirit of the old god-physician might confer some of his healing powers upon me, but it was winter and all I achieved was a touch of rheumatism.”