The Monument is an undeniable exhibition of architecture merged with seventeenth century science. It offers spectacular views of London and was built to preserve the memory of the devastation caused by the Great Fire of London in 1666. This outstanding two hundred and two feet high Doric column with cantilevered stone staircase of three hundred and eleven steps leads to a viewing platform. It was stipulated in the London Building Act of 1667 for a column or pillar made of brass or stone to celebrate the rebuilding of London. Hence, Sir Christopher Wren, Surveyor General to King Charles II was commissioned to design and build the structure.

As the Surveyor of the Kings Works, Christopher Wren was in charge of the Royal Commission for Rebuilding London including the City Churches, the most notable being St Paul’s Cathedral. Hence, it is through no fault of his that he was initially credited for the design of the Monument. The general attribution changed after the publication of the diary of Dr Robert Hooke, a close friend and colleague of Wren, which had numerous references on its construction.

Hooke and Wren had known each other since their days at Oxford where they began collaborating in scientific experiments. Their friendship continued in the newly formed Royal Society where both were active members and Hooke had been appointed Curator of Experiments in 1662. 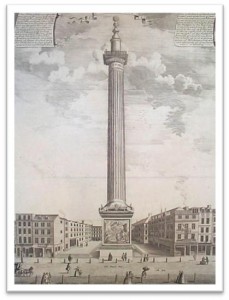 Illustrated drawing of the Monument. Image available in public domain.

Wren submitted the first proposed model of the Monument for consideration but the one that closely resembles the Monument was the design submitted by Robert Hooke. He recorded in his diary saying ‘perfected module of Pillar’ (as he often called it) and ‘At the Pillar in height 250 steps’. This shows how involved Robert Hooked was with the planning and construction of the column.

He also noted some structures which he thought should go on top of the Monument; from a large Ball of metal gilt to a large statue of the King. He went on to even propose a ball of copper and a phoenix which he had made and attached to a wooden model of the pillar. He later rejected it after he felt it would be expensive, misunderstood and dangerous if the wings were detached by wind. But what sits at the top of the Doric column is a flaming brass urn and whose idea of it is unknown.

A lesser known fact about the Monument is that it was purposely designed to serve two functions: as a memorial landmark and as a scientific instrument. Fuelled by their interests in astronomy and microscopy, Hooke and Wren decided to build a structure that would serve as a giant, vertical zenith telescope. A place where the movement of the earth round the sun can be observed for an extensive period of time and an opportunity to continuously observe the night sky.

Their effort is something to be greatly admired as they went on to build an underground laboratory (twenty feet deep with openings that allows access to air) which was intended to be used by the experimenter for experiments and to store his equipment. It is directly beneath the vertical shaft and the spiral staircase, and is offered a clear view of sky through the ornamental urn with a hinged lid. It is here that Wren and Hooke believed they would comfortable measure the tiny shifts in the position of the stars in the sky from their zenith telescope which they had failed to do in two previous attempts.

To veer ones thoughts away from the challenge of climbing three-hundred and eleven steps, you can imagine Robert Hooke climbing these steps to perform experiments, from measuring the pressure at different points (while climbing down the steps), to determining the height of the Monument (the distance from the upper platform to the floor of the underground laboratory). The latter would allow him to resume the pendulum and Torricellian experiments that were halted by the Great Fire. He also noted performing other experiments in his diary saying ‘At Fish Street Pillar (Monument) tried mercury barometer experiment … it descended at the top about one-third inch’. He was even known to have conducted several experiments at the Monument for the Royal Society including continuing an experiment previously started by Christopher Wren and Robert Boyle that later led to him developing a wheel barometer.

As I cast my gaze towards the rest of London at the top of the Monument, I cannot help but revel in the majestic yet complex nature of this seventeenth century structure. It is hard not to be impressed by the intricate use of science in creating a unique monument that unquestionable had become very important in Robert Hooke’s life. To move experiments from Gresham College (home of the Royal Society) to the Monument showed his belief in his vision. Hence, it must have been disappointing when the Monument failed to fulfil its intended function as a zenith telescope. They were never able to prove the movement of the earth around the sun as the vertical shaft was not stable enough to allow the level of accuracy needed for the measurements. 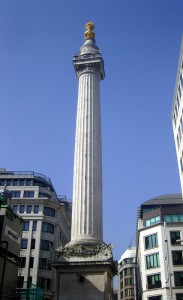 Today, the Monument remains a popular tourist attraction with an extensive view of the London Skyline with the underground laboratory empty and closed off from the public. It has undergone restorations and repairs including the addition of a computer-controlled digital camera that provides live images and views from the top of the Monument for visitors including those that are not able climb the steps.

It is sad to know that their hope of utilising it as a large-scale scientific instrument was never fully achieved; however, the Monument allowed the vision of both Wren and Hooke to come to life and celebrates their innovations and contribution to the history of science.