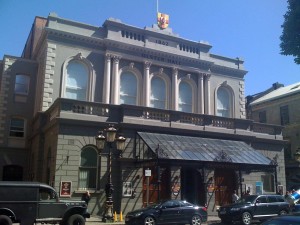 View of the Ulster Hall from Bedford Street, after refurbishment in 2009.

The Ulster Hall opened in May 1862 on Bedford Street, in the shadow of Belfast’s White Linen Hall – now the City Hall. The architect WJ Barre had beaten forty-one competitors to win the commission, despite his relative youth and inexperience. Barre’s design for the Hall included a simple exterior framed by a modest portico, and the apex of the building supported a coat of arms that included an Irish deer and wolfhound. However, the Ulster Hall Company faced a severe shortage of funds during construction and Barre’s plans for an ‘opulent interior’ were replaced by a single coast of whitewash. Nevertheless, the ornamental was not totally neglected and the windows were adorned by small figurines of shamrocks, harps and other ‘emblems of Erin’.

The Hall was a source of civic celebration, and the ‘pride of the Hall’ was the grand organ, built by William Hill and presented to the city by former mayor Andrew Mulholland. Over 200 performers could entertain 2000 audience members in the ‘airy and dignified’ auditorium. And, in this famous Linen town:

The monotonous hum of the spinning-jenny and the continuous clack of the power-loom can be hushed into silence, in order that the rich and poor, the manufacturer and the sons and daughters of toil, may meet-together beneath the arched roof…to spend there a few short hours of relaxation, pleasure and excitement.

Although designed for concerts and ‘grand balls’ the Ulster Hall frequently hosted banquets, itinerant speakers, sports events and exhibitions. For example, Charles Dickens read from A Christmas Carol and David Copperfield in 1869, while the evangelical preachers Moody and Sankey packed the auditorium in the 1870s, and the French actress Sarah Bernhardt thrilled a half-filled Ulster Hall in 1881. In 1909 the great Italian tenor Enrico Caruso entertained a large crowd, of mostly Harland and Wolffe shipbuilders, and the Hall hosted regular boxing bouts and dances for American Soldiers in the 1940s.

However more notably, throughout its 150-year history the Hall has been indelibly linked to Ulster’s political struggles. For example, Lord Randolph Churchill used the Hall to rally the Belfast public and members of the Orange Order against Gladstone’s first Home Rule Bill in 1886, urging that ‘Ulster will fight; Ulster will be right.’ Similarly, Ulster men and women led a ‘massive demonstration’ objecting to the third Home Rule Bill in the Hall prior to signing – some in their own blood – the Ulster Covenant in 1912. Also, from the 1960s onwards, a number of controversial political and paramilitary rallies were hosted in the Hall. However, what is less known in the Ulster Hall’s history is its role as the site of one of the most prominent encounters of Victorian science and religion – John Tyndall’s infamous ‘Belfast Address’. 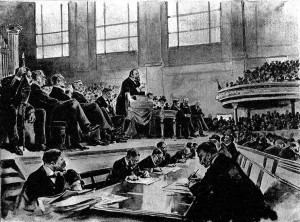 Tyndall, the Carlow-born physicist and Royal Institution lecturer was President of the fifty-fourth meeting of the British Association for the Advancement of Science, which met in Belfast in mid-September 1874. The Association’s annual presidential addresses were likened to ‘Queen’s speeches’, providing overviews of the year in science, and were eagerly anticipated. Tyndall, however, used his presidential address to deliver what was ‘widely interpreted as perhaps the chief pronouncement of scientific materialism in the nineteenth century’.

Tyndall’s ’s magnificent two-hour address was delivered with ‘evangelical fever’ in a packed Ulster Hall draped in Association scarlet. His argument was complex. Beginning by covering the birth of science in ancient Greece to its decline in the Middle Ages under the influence of Aristotelian thought, Tyndall touched on the struggles of Copernicus and Galileo against the tyranny of the Church. He also celebrated the advances in evolutionary theory and physics, after a brief interlude involving the eighteenth-century theologian Bishop Butler. In the final section of the address Tyndall outlined a ‘higher materialism’ that rejected the simplistic materialism of Democritus, before commenting on the boundaries between science and religion. Few grasped the nuances in Tyndall’s address. What most remembered, however, was his suggestion that all ‘religious theories, schemes and systems which embrace notions of cosmogony … must … submit to the control of science, and relinquish all thought of controlling it.’ 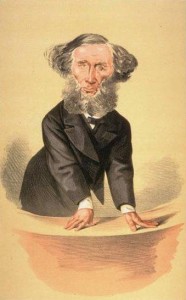 Almost immediately, Tyndall’s ‘speculative materialism’ provoked an outcry. In Belfast, Presbyterian pulpits thundered replies to Tyndall’s ‘materialist manifesto’. The Rev. Robert Watts, whose own paper ‘An Irenicum: Or, a Plea for peace and Co-operation between Science and Theology’ had been refused a hearing at the British Association’s Biology Section, led the charge at his Fisherwick Place Church, close to the Ulster Hall. Similarly, at Rosemary Street Presbyterian Church the Rev. John MacNaughtan attacked both Tyndall’s materialism, and his abuse of the British Association’s presidential chair in making his remarks. Such was the outrage that a whole series of winter lectures were planned to allay the damage done by Tyndall’s ‘frontal assault’ on Christianity. Ireland’s Catholic bishops, too, issued a pastoral letter attacking the blasphemous ‘professors of Materialism’, and there was widespread denunciation of Tyndall in the British periodical press.

Belfast’s Ulster Hall was ‘metaphysically filled with the smell of Brimstone’ by Tyndall’s Address. But more than that, the historian of science Frank Turner has suggested that Tyndall’s address was a catalyst in sparking ‘perhaps the most intense debate of the Victorian conflict of science and religion’.

For more information on the Ulster Hall see http://www.belfastcity.gov.uk/ulsterhall/. Fisherwick Place Church relocated to the Malone Road in the 1890s, although the site is still occupied by the Presbyterian Church. Rosemary Street Presbyterian Church is in central Belfast.