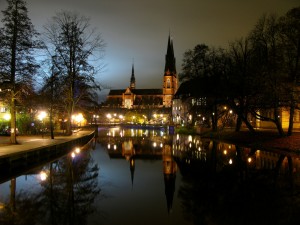 Linnaeus Garden. Linnaeus was appointed Professor of Medicine at the University of Uppsala in 1741, after some rather undignified infighting among several candidates for the position. Botany was academically a part of medicine at the time because plant extracts were the most common form of medication, and renovation of the university’s neglected botanical garden (originally founded in 1655) was one of the new professor’s assigned tasks. A house adjacent to the garden came with the appointment and served as Linnaeus’s residence. Classically proportioned, with a red brick facade, it now serves as the garden museum, laid out and furnished much as it must have been in Linnaeus’s day.

The garden area itself has been beautifully restored-the layout is nearly the same as the original, modeled according to the prevailing style, with narrow parallel formal beds and three pools and an orangery at the back. Two symmetrical sections (parterres) contain beds for perennial and annual (or biennial) plants, respectively. Arrangement within the perennial parterre is strictly in the order of the Linnaeus classification, but there are 44 beds for the 24 classes, allowing more than one bed for some classes. The annual plants are also grouped together by class, but the order varies from year to year. The path between the two sections is bordered by showy ornamental plants, and the pools beyond have water plants. The orangery used to be divided into frigidarium, caldarium, and tepidarium, to provide for a range of indoor environments, but it is less elaborate aeus in Lapland costume, from a 1737 painting. The flower fastened to his tunic is the twin flower, Linnaea borealis, shown here in a separate photograph. It blooms only briefly, close to midsummer, so you may not see it in the garden when you visit. today. Parts of it now have non-botanical uses, such as choir practice for a local group. Two little shelters on top of high poles near the entrance used to house chained monkeys. Linnaeus was very fond of the monkeys and is reported as having been unashamedly grieved when one of his favourites died.

Linnaeus died at his garden residence and was buried in Uppsala Cathedral. There is a monument with a medallion portrait in a chapel off the north aisle. The tomb slab itself is in the floor, a little closer to the main entrance. The cathedral is the largest church in Scandinavia and parts of it date back to the thirteenth century.

In the outskirts of Uppsala we have Linnes Hammarby (6 miles [10 km] southeast), Linnaeus’s former summer residence, now a small state park. Linnaeus sometimes lectured here to students and large crowds of visitors. A little further out, toward the southwest, is Wiks Slott (Wik Castle), a fifteenth-century fortress with a fine park at the edge of a lake. Svante Arrhenius was born here in 1859, his father having been overseer of the estate at the same time as he was working for the university. (The university salary improved a year later, and the family was able to move into the city.) Gamla Uppsala (Old Uppsala), just north of the modem city, is also worth a visit. It was the royal capital of the Svea kingdom 1,500 years ago and contains burial mounds and other antiquities.